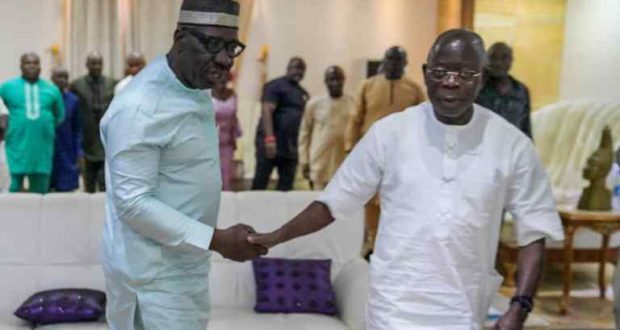 Godwin Obaseki, governor of Edo state says ex- National Chairman of All Progressives Congress(APC),Adams Oshiomhole wanted to arrogate himself godfather in the state.

Speaking through Crusoe Osagie, his special adviser on media and communication strategy, Obaseki said Oshiomhole supported him in 2016 because he had a hidden motive.

Oshiomhole had said his mission in Edo is to ensure Obaseki’s defeat in the September 19 governorship election while apologising to the people of the state for supporting him to emerge as the governor in 2016.

“I have made a mistake by supporting a man who has no vision for my people. So, I want to correct my mistakes by making sure a servant of God, Pastor Osagie Ize-Iyamu, is elected as governor and kick the snake out of the government house,” he had said.

“From now till September 19, I am here in Edo State because a political lion that I am, I am not scared of anything.

“Now the snake that enters our family home, God has driven the snake to where he belongs.

“I have come home to join you and start the process of reclaiming the house back to the family of APC. So, now I have only one mission and I know it is our common mission: to bring Edo back to the part of sustainable development.”

The governor said the former APC national chairman’s plan was to use him as a pawn to defraud the people of the state.

He said Oshiomhole was frustrated over his failure to achieve his goal to govern the state for a third term using him as a proxy.

“In 2016 when Oshiomhole nominated and supported Obaseki, his hidden motive was to use Governor Obaseki. who he thought would be a pawn in his game to defraud Edo people and enthrone himself as the ultimate godfather of Edo politics at the expense of the will and wishes of Edo people,” he said.

“However, Obaseki’s refusal to mortgage the interest of the majority of Edo people for the satisfaction of Oshiomhole and his handful of greedy followers is the cause of Oshiomhole’s bitterness which has led him to bury himself in pursuit of an innocent governor who is trying to do the right thing for his people.”