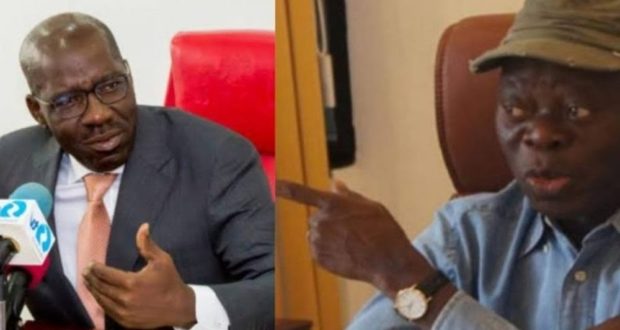 Oshiomhole: What Next for Dethroned APC Chairman?

In a desperate manoeuvres that began last year before and after the 2019 polls, and two false starts involving improperly convened National Executive Committee (NEC) meetings, the All Progressives Congress (APC) finally got rid of their chairman, Adams Oshiomhole, on June 25. The deposed chairman, embattled for much of his reign, has now had more than two weeks to reconcile himself to his new but somewhat humiliating status. From calling the shots in the ruling party, a role he relished with aplomb, Mr Oshiomhole has found himself virtually idle, unlikely ever again to preside over the affairs of a party he has loved and tried his best to redefine and imbue with a new sense of mission and purpose.

Though he has publicly aligned himself with the summary decision of President Muhammadu Buhari to kick-start the reconstitution of the National Working Committee (NWC), the former chairman has said and withheld enough to let the party and the rest of the country know that he abhorred his overthrow and the manner by which it was procured. He knew that his enemies were so powerful, and their backers in the presidency also so conniving, that it did not matter what he did or didn’t do to attract the punitive move against him. It was enough that he had strong character and was willing to stand up to the many powerful interests in the party, especially the coterie of governors dedicated to his overthrow. Being merely himself, when the job demanded a snivelling, ingratiating chairman, was all it took for the hunting pack to dismantle him and knock him insensate.

Of course Mr Oshiomhole was cognisant of the politics of presidential election 2023, and probably had some definite ideas of how things should progress. He probably also knew a thing or two about how the plots against him was shaping up, and the leaders of the rebellion. It is unlikely, however, that he guessed the relentless plot to unseat him would mature as quickly as it did, and his chairmanship unravel almost without resistance. There were too many in the other corner, and two few in his corner, to matter what nimbleness of feet he had shown and how fanciful his punching grace and power were. There is also no doubt that he knows all too well the first and second eleven, so to speak, of those who finally knocked the bottom off his chairmanship. There is little he can do about them now, except perhaps rue his fall and the abominable methods by which his temporary political demise was midwifed.

Mr Oshiomhole will now have to look into the future. He is a more natural progressive, though not the archetype, than nearly all of those who conspired against him. So he will stand pat in the party. There is no longer a need to mollify his enemies, and being a good puncher himself, he will not shirk a fight with them, nor pull his punches henceforth. He has seen how vulnerable a party leader can be once his base at the ward level has been compromised, as his vengeful and compromised ward chairman confessed early this week; so he will return home to stitch up the loose ends. He probably now has a better understanding of his party’s fidelity to both truth and party constitution; so he will have no illusion that both can and will constantly be denigrated, twisted and co-opted into openly selfish ends.

The former chairman’s education was completed when officials within the party who had no locus whatsoever seized upon a dishonest action by Mr Oshiomhole’s ward chairman to extract favourable judgements from the courts. After suffering humiliation by being tied up in legal knots for weeks on end, he now understands perfectly the toxic and putrefying relationship that sometimes exists between some courts and powerful state and national interests. For all his grandstanding and volubility, Mr Oshiomhole was in fact an innocent in the APC arena. He now knows he was and indeed cannot be as realpolitk as many powerful figures in his party, many of whom have sold their souls to the devil. More, he now knows that the presidency midwifed by his party and installed in office since 2015 is in fact a pawn in the political and moral smorgasbord of the APC.

On June 25, the idealist in Mr Oshiomhole died with his deposition as chairman. While his reign lasted, he did a number of controversial good. He infused a new sense of responsibility in the party, starting with the party organ itself, and did his best to curb the distinct feudalism, if not outright nihilism, of many of the party’s prominent leaders. His predecessor paid lip service to ideology, and Mr Oshiomhole himself, starting out, was not clearly and definitively ideological. But he nevertheless set about redefining the party in such pragmatic ways that no one should ever confuse it with the conservative and increasingly reactionary People Democratic Party (PDP). That redefinition process has now been aborted, with the party helplessly prostrate in the temporary stranglehold of a few powerful but less moralistic and ideological party leaders, many of them governors and former governors. If he had enough time, Mr Oshiomhole would have whittled down the number and influence of this predatory group. Today, however, his enemies are in the majority. It will take time, if ever, to transform those who have tasted blood and loved it, into a minority, a minority devoid of influence and voice.

After June 25, Mr Oshiomhole seems to have been born into a new realism. He sensed the futility of fighting the presidency, though he knew clearly that the president erred in siding with the amoral group that raised rebellion and fused it into a judicial bugaboo to overthrow him. He, therefore, sensibly threw in his lot with the new reality, as objectionable and repugnant as it was. He backed his own overthrow, he croaked despondently, and would continue to be loyal to both the party and the president. Moreover, he also groaned, he had learnt a thing or two about partisan politics. He had been damned with faint praise by many in his corner, particularly from his state, Edo, but unlike his predecessor, John Odigie-Oyegun, who refused to reconcile himself to new realities, Mr Oshiomhole seems eager to prove that he will do nothing to upset the apple cart, nor take issue with the president’s inexplicable embrace of one side in the fray, the wrong side in fact.

Whether the APC caretaker convention committee likes it or not, Mr Oshiomhole will play a significant role in the election of a new NWC. He is so naturally irrepressible. His enemies, who have begun to foment more trouble in the party with an eye on 2023, will keep an eye out for him, determined to match him plot for plot, and swagger for swagger. But the former chairman has many things going for him, not least among which is his pluckiness; and he will continue to wage battle in the hills as well as in the valleys, incommoded by nothing, not even the sanguinary vista of spilled blood and strewn corpses. He is not afraid, and he is never tired. Importantly too, he has a mind of his own. Such natural warriors always go the distance, except hobbled by illness. For such a man, setbacks are nothing but stepping stones.

The immediate task before Mr Oshiomhole is winning the Edo poll for the APC. He had backed the wrong horse in 2016, Godwin Obaseki, a short-sighted politician who feigns charisma. Now, he is placing his wager where he should have placed it a long time ago, on Osagie Ize-Iyamu, a more natural politician and former charismatic youth leader. Mr Obaseki has antagonised virtually everyone he could not afford to make an enemy in Edo, and has caused raised eyebrows in polite circles that now see him as a dictator devoid of the inspiring instinct of an administrator. A larger portion of the state resent his obtruding nature and high-handed politics. But the wily Mr Obaseki, never known for restraint or the ability to carefully measure a response, has adamantly framed the coming plebiscite as one of fighting godfathers and freeing the resources of the state for the people. His narrative will resonate. He has also attacked the APC campaign coordinators and singled some of them out for excoriation in billboard campaigns.

Mr Oshiomhole and his team must resist the temptation to be incensed. They have a majority of the electorate behind them. They must, therefore, calibrate and time their responses, while not reducing the amperage of their campaign. Mr Obaseki has said and done few things wisely. Mr Oshiomhole and his team must expose the governor’s obtuseness and folly as carefully and forcefully as they can. Above all, they must find fitting answers to the godfather accusation levelled by the governor and his team. There is nothing to suggest that even if Mr Oshiomhole’s party loses the poll, as some APC governors indeed want in order to prove a point, his political coffin would be nailed, but it helps considerably should he and his party win. The former chairman must have known by now that he has enemies in both the PDP, which he and his party will be facing in a matter of months, and the APC, which has in five dizzying years spawned a nest of adders so vicious and masochistic as to desire shooting themselves in the foot.

Between himself and his enemies who bested him a few weeks ago in the party’s NEC, Mr Oshiomhole is the more likeable person and politician. He is not a dyed-in-the-wool godfather as some allege, and he is acutely aware that Mr Ize-Iyamu, a far better politician than Mr Obaseki, will as governor be even harder to control. Mr Oshiomhole will nevertheless survive not only in the short run, despite being out of the party’s leadership, but also in the long run. He is said to be brusque and in possession of a sharp tongue, but he is a consummate party man, hard working, fairly ideological, unlikely ever to defect simply because of a loss, and less vindictive and vengeful. He needs Edo governorship victory to guarantee bouncing back. But he will bounce back regardless, for he is at bottom a good-natured man, one with such joie de vivre that he knew instinctively how to balance antagonistic forces during his labour union days, and ruled Edo sensibly and productively for two terms leaving indelible marks.