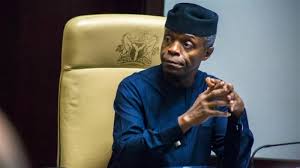 Osinbajo may declare interest in 2023 presidential election on Monday

After months of rumours and speculations about the possibility of the Vice President Yemi Osinbajo contesting for 2023 Presidency, the nation’s number two man  is set to declare his interest in the 2023 presidential election tomorrow.

The Vice President will be contesting alongside with his erstwhile boss Bola Tinubu; whom he worked under as a Commissioner for Justice in Lagos between 1999 to 2007

According to some insiders, the declaration of the second most powerful citizen iwill not involve any formal event or public gathering.

It was learnt that  he will release a recorded video of about seven to 10 minutes, where he will formally make his intention known to his teeming supporters and Nigerians.

Politico.ng gathered that the video which is expected to go very viral will be distributed across his social media handles.

After the release of the video, the campaign team will get to working immediately.

It will be recalled that Asiwaju Bola Tinubu, Rochas Okorocha, Governor David Umahi of Ebonyi State, Governor Yahaya Bello of Kogi and Rotimi Amaechi have all declared intention to succeed President Mohammadu Buhari in 2023 under the platform of the All Progressive Congress APC.