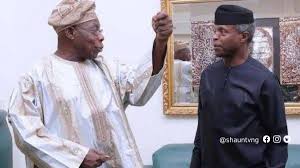 It was learnt that the dialogue was organised by the Coalition for Dialogue on Africa (CoDA).

The dialogue tagged, ‘West Africa: Rising To The Challenge Of Consolidating Democratic Governance’ will hold at the Olusegun Obasanjo Presidential Library (OOPL), Abeokuta on Monday and Tuesday.

It was learnt that Osinbajo’s helicopter landed within the premises of the OOPL at exactly 10:24am.

The country’s number two man came in the  company of Ogun State Governor, Dapo Abiodun and others,

Osinbajo was later received by Obasanjo as they went to d to the venue prepared for the meeting.

Speculations are rife that Osinbajo is eyeing the presidency in 2023, but he has not made his intention known despite the demands of the various political groups to declare intention openly.

His visit to Obasanjo is coming less than 48 hours after the ruling All Progressives Congress (APC) concluded its national convention.

It will be recalled that  Osinbajo presidential campaign has gained momentum across all platforms with various groups of his supporters and admirers pushing for his emergence as the next president.