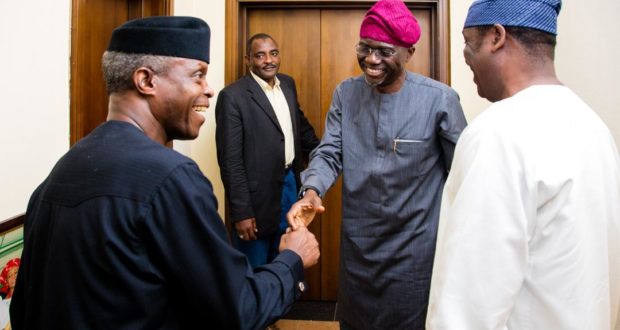 The Governor’s Advisory Council(GAC) of the Lagos chapter of the All Progressives Congress, APC, has endorsed Babajide Sanwo-Olu to pick the party’s governorship ticket for the 2019 election in the state.

Anthony Adefuye, a member the Council, announced the endorsement to party members on Saturday, at a stakeholders’ meeting at the ACME Road State Secretariat of the party.

He said the GAC, the highest decision-making body of the chapter, arrived at the endorsement after a meeting which lasted for several hours.

Adefuye said the meeting was chaired by National Leader of the party, Bola Tinubu, and was attended by other prominent members of the party.

Adefuye listed Vice President Yemi Osinbajo, the Majority Leader of the House of Representatives, Femi Gbajabiamila and Speaker of the state House of Assembly, Mudashiru Obasa as some of those also at the meeting.

He said that the decision to back Sanwo-Olu, a former Commissioner for Training and Establishment, against the incumbent,  Akinwunmi Ambode, was in the interest of the state and the party.

Adefuye also announced that the Governorship Primary had been postponed from Sunday to Monday but gave no reason for the shift.

He told the crowd that another Aspirant, a former Commissioner for Works,  Obafemi Hamzat, had withdrawn from the race and had endorsed Sanwo-Olu.

“There was a GAC meeting held this morning which was attended by the Vice President, Yemi Osinbajo, Majority Leader of the House of Representatives, Femi Gbajabiamila, Speaker, House of Assembly, Mudashiru Obasa, and others.

“This meeting was chaired by our National Leader, Bola Tinubu. This is a meeting that we started at 10am. and we couldn’t finish early.

“After the meeting, I have been mandated by the GAC to announce this to you.

“The Governorship Primary earlier scheduled for tomorrow, September 30th, has been shifted to Monday, October 1.

“Also, the GAC was informed by Obafemi Hamzat of his decision to graciously step down and endorse Jide Sanwo-Olu.

“GAC has endorsed Babajide Sanwo-Olu as its preferred candidate ahead of the primary,” he added.

The announcement threw the crowd of Sanwo-Olu supporters at the meeting into wild jubilation.

Chants of Sanwo-Olu! Sanwo-Olu ! took over the atmosphere as supporters of Ambode exited the party Secretariat in disappointment.