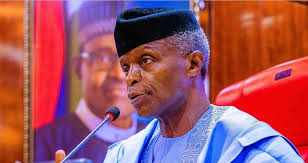 Osinbajo yet to send congratulatory message to Tinubu

About 24 hours after the victory of Bola Tinubu at the All Progressives Congress, APC, presidential primary, Vice President Yemi Osinbajo has been silent.

It was observed that Osinbajo has not issued any congratulatory message to Tinubu on his emergence as the APC presidential candidate.

Tinubu had floored presidential aspirants like Osinbajo, Rotimi Amaechi and Dave Umahi, who were front runners ahead of the polls.

Prior to the APC Special Convention, Osinbajo was accused of betrayal by opting to contest for the Presidency alongside Tinubu.

Osinbajo was one of the politicians believed to have been tutored by Tinubu. The Vice President was Tinubu’s Attorney General while he was the governor of Lagos State.

Amid controversial stories, Tinubu had claimed he suggested Osinbajo’s name to President Muhammadu Buhari as his deputy in 2015.

Previous: Muslim-Muslim ticket will be a national suicide- HURIWA warns APC
Next: Umahi promises to give Tinubu bulk votes in Ebonyi