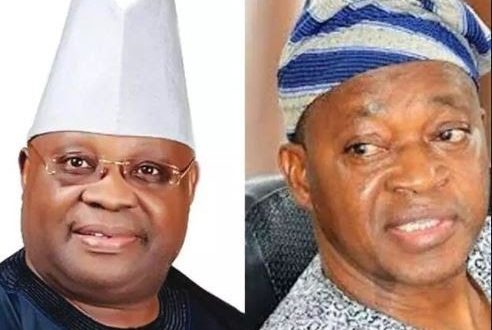 The Independent National Electoral Commission (INEC) on Wednesday urged the Court of Appeal Abuja to return Adegboyega Oyetola of the All Progressive Congress (APC) as duly elected governor of Osun State.

Others who prayed the court to return Oyetola as governor includes the APC, and Oyetola himself.

Counsel to the parties made the unanimous call while adopting their written addresses before a five-man panel of justices of the court led by Justice Hannatu Sankey.

The other justices are Abubakar Yahaya, Isaiah Akeju and Bitrus Sanga.

The Osun State Governorship Election Tribunal on March 22 declared Ademola Adeleke of the Peoples Democratic Party (PDP) as the duly-elected governor of the state.

The tribunal held that the re-run election conducted by the Independent National Electoral Commission, INEC was unconstitutional.

It therefore directed INEC to withdraw the Certificate of Return earlier issued to Oyetola and issue same to Adeleke.

Mr Yusuf Ali, SAN, Counsel to INEC while adopting his address, however argued that the decision of the lower tribunal was made in error.

Ali submitted that the respondents’ argument that the commission failed to conduct proper accreditation and deliberately voided votes to favour Oyetola was a figment of imagination.

He said the Adeleke and the PDP failed to prove over-voting in the election, adding that the results from both the Sept.22 and Sept. 27, 2018 were true reflection of the exercise.

He however, explained that the anomalies in the recording of votes in columns of form EC8A were not substantial enough to sway the election in Adeleke’s favour.

Ali submitted that the commission fully complied with the provisions of the Electoral Act and the 1999 Constitution as amended in the conduct of the election.

On his part, Chief Wole Olanipekun, SAN, Counsel to Oyetola, averred that Adeleke’s return by the majority decision of the tribunal was done in error.

He explained that Justice Peter Obiora, who delivered the lead judgment was not diligent in his attendance of the proceedings.

Olanipekun submitted that the judge was particularly absented himself on April 6 proceeding but went ahead to make references to the proceedings of that day.

He said the validity of the decision was called to question as the Justice Obiora failed to sign it.

“My Lord, we were in court on April 6 and we can testify that Justice Peter Obiora was not part of the panel that day, but we were surprised that he made allusion to the proceedings he never experienced in the judgment.

“We can also see from the judgment heading that his name was listed as part of the panel but he clearly did not sign his portion on the document.

“My Lords, we implore you to discountenance the decision and set it aside.

“We also pray the court to return Oyetola as the duly elected governor of Osun’’, he said.

On the whether the respondents proved over-voting, Olanipekun submitted that they only dumped the Voter Register on the tribunal without linking all the variables that could prove over voting.

Also, Chief Akin Olujimi (SAN) Counsel to the APC aligned himself with the arguments canvassed by both Olanipekun and Ali.

Olujimi argued further that the respondents had merely drew inferences and not evidential matters that could sustain the tribunal’s decision, adding that the appeal should be upheld.

However, Dr Oyechi Ikpeazu (SAN), Counsel to both Adeleke and PDP urged that court to dismiss the submission advanced by the counsel to the appellants, adding that the cancellation of the Sept.22, 2018 governorship was unconstitutional.

Ikpeazu submitted that the Electoral Act did not empower INEC to willingly cancel election when a winner had clearly emerged.

He explained that the cancellation which was done by the collation officer rather than the presiding officer was indicative of how deep the electoral body went to thwart the process in favour of the APC candidate.

He also said that the respondents were able to prove over voting at the lower tribunal, adding that the supplementary election conducted in 70 polling units on Sept.27 was marred by violence and malpractices.

“Our contention has always been the non-declaration of Adeleke after he was clearly in the lead and it was resounding that the tribunal eventually right the wrong’’, he said.

He further INEC was unable to defend the entire process that it handled, adding that vital sensitive forms that should guarantee transparency of the process were not entered by the electoral body.