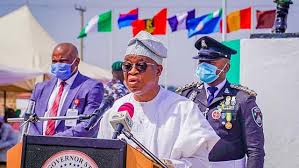 Ahead of the Osun State governorship poll, the All Progressives Congress (APC) Professional Council has commenced house–to–house and town hall campaigns to promote the programme of the party and ensure the party wins the forthcoming governorship election.

The Director-General of the group, Dr Seyi Bamigbade, who revealed this to journalists in Lagos, said the council has appointed the chairman, Ifè Central Local Government Area, Hon Elugbaju Olayera, as the leader of the house-to-house campaign team and the council’s National Director for Youth and Students Affairs, Mr Adebayo Adewale as the Secretary.

Bamigbade said the professional council of the party came up with the initiative to contribute meaningfully to the re-election of Governor Adegboyega Oyetola as Osun State Governor for the 2nd term.

According to him, the house-to-house voters’ education and sensitization programme will run in all the local government areas of Osun State in order to galvanize professionals’ participation in the electoral process.

Bamgbade also appealed to the appointees to see the assignment as a sacred duty, while reminding the populace about the achievements of Governor Oyetola within the last three years.

Also commenting on the initiative, the National Publicity Secretary of the Council, Mr Fatai Abiodun, stated that the programme will help to educate and enlighten potential voters on the need to vote right.

He said only the candidacy of Governor Isiaka Oyetola can bring the needed change the state is yearning for and sustain the giant stride recorded by the administration in the state.