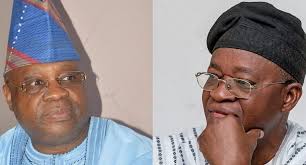 As the governorship election of the Osun State is getting nearer, the main opposition, the Peoples Democratic Party (PDP) has raised an alarm, accident the  All Progressives Congress (APC) of mobilizing thugs ahead of the polls which will take place on July 16, 2022,

Speaking in a statement, the major opposition party alleged that the motive of the thugs according to the information at their disposal is to be invading polling units to disrupt the poll.

Shedded light on the matter, the the Osun PDP Chairman, Caretaker Transition Committe, Akindele Adekunle said that the thugs were imported from Lagos and they are already in every nook and cranny of the state.

,The statement reads:  “We have reports that such daredevil hands have been deployed to various zones, including Iwo zone where a PDP party agent was shot at and Osogbo axis where the residence of the governorship candidate of Labour Party was attacked.

“The increasing number of attacks and the unchecked activities of thugs across the State pose serious danger to the peaceful conduct of Saturday elections.”

“APC is not known for violence. Rather, it is renowned for organising proper election and wooing residents to come out enmasse to vote for its candidate, Governor Adegboyega Oyetola and does not engage in frivolities like engaging in thuggery,” he said.

Previous: 2023 Presidency: Peter Obi’s emergence will bring an end to clueless leadership- Group
Next: 2023: The choice of Shettima as Tinubu’s running mate a blessing- Group