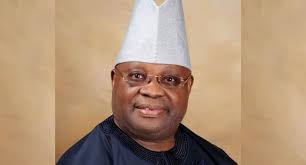 Ademola Adeleke, popularly known as Dancing Senator has emerged the governorship candidate of the Peoples Democratic Party (PDP) in Osun, after winning the primary election backed by the national working committee (NWC).

Declaring the results of the primary election, Returning Officer and Deputy Governor of Bayelsa, Lawrence Ewhrudjakpo, announced that 1,916 delegates participated in the exercise.

He added that Adeleke polled 1,887 votes to defeat his rival, Dotun Babayemi, who had no vote.

It should be noted that Babayemi had earlier won the parallel primary election backed by Olagunsoye Oyinlola, the former governor of Osun state.

The parallel primaries were held simultaneously at the Osun Township Stadium and WOCDIF event centre in Osogbo.

Previous: APC crisis worsens as National Secretary, James Akpanudoedehe resigns
Next: Umahi: It is the turn of Ben Ayade to go- PDP