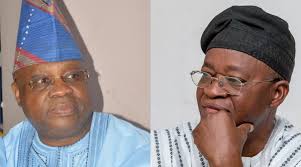 Ahead of the upcoming governorship election in Osun State, the state  chapter of the Peoples Democratic Party (PDP) has decried the destruction of the campaign billboards of Ademola Adeleke, their gubernatorial candidate in Osogbo and other parts of Osun State.

The opposition party said that the act is  barbaric and dangerous plot to cause political crisis.

The statement was issued on Friday by Akindele Adekunle, the Osun PDP Caretaker Committee Chairman.

The opportunity party warned that resorting to violence couldto prevent Osun people from making their leadership choice in the upcoming governorship election, noting that the act could backfire.

It further warned that people’s rights to choose who would administer their affairs was not tampered with.

According to the statement, “One of such plot is the willful destruction of Senator Ademola Adeleke billboards to reverse the increasing acceptability of the PDP candidate in all parts of the State.

“Let us, for the purpose of emphasis, warn those behind this plot that they will be matched, not necessarily by equal measure of violence but by whatever it takes legally to resist such attempt as to intimidate the good people of Osun State or coerce them into submission.

“This will mean we will not hesitate to mobilize Osun people against the violence that is being promoted by the ruling All Progressives Congress (APC).”

While calling on the world to hold the All Progressives Congress (APC) responsible for any breakdown of law and order in Osun, the PDP warned that it will no longer watch the destruction of its candidate’s billboards and watch any other attack on its campaign materials go without a response.

The party boasted that its campaign had been peaceful so far.

“In all our campaigns so far, we did not involve in any kind of destruction or attack, but kept focus on our message of hope and revival of Osun State and the suffering masses.

“We know so well how much our rescue mission means to Osun people and how such message had constituted a thorn in the flesh of the clueless APC, but we will not allow their violence take shape as we are not unaware of such show of frustration by the APC as the last kick of a dying horse.

“They can continue to vent the venom of their bitterness on the paper boards for all we care, but they should be rest assured that that will not dampen the resolve of the populace to boot APC out of Osun State,” he said.