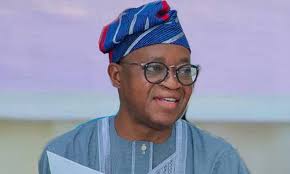 The Osun Governor, Adegboyega Oyetola has given the assurance that there will be adequate security as the governorship election draws near.

He said this on Wednesday when his re-election campaign train visited Ibokun, Obokun Local Government Area of the State.

In his words, “We have been working on adequate security for this election and we will ensure that every life and property are secured before, during and after the election.

“Go out en-mass and vote and make sure you watch your votes. I believe with this support, we have emerged victorious.”

It was gathered that Oyetola has  earlier visited Oba Festus Awogboro, the Alademure of Obokun.

It will be recalled that Oyetola  and some gubernatorial candidates had  signed a peace document by the ‘Vote Don’t Fight Foundation’, of which hip-hop singer, Innocent Idibia, aka 2Baba is the Peace Ambassador.

It was learnt that Oyetola of the APC, Ademola Adeleke of the Peoples Democratic Party (PDP), Akin Ogunbiyi of the Accord Party also signed it.

Osun State gubernatorial election will hold on Saturday, July 16, 2022 and the incumbent governor, Adegboyega Oyetola of the All Progressives Congress also in the race.