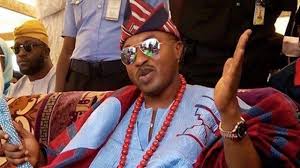 Oluwo of Iwo, Oba Abdul-Rasheed Akanbi, has told the people of Iwo Kingdom to vote massively  for Governor, Adegboyega Oyetola, in the upcoming governorship election.

The first class monarch made this statement while speaking  during an Inter-Religious Prayer he organised for Oyetola’s victory in the forthcoming poll that will take place.

According to the king, many people have registered, currently all the over 90,000 voters in the town must vote for the incumbent Govermor..

Explaining why he is supporting Oyetola, he said that he hoped Iwo would be given the opportunity to produce governor After Oyetola’s tenure in 2026.

He said, “I have a dream and a mission and my dream is for this place to produce the state governor come 2026. This governor has done his own. I want to use this as a prayer point for Iwo to produce the next governor in 2026.

“We have to give our vote to Oyetola for the future of Iwo. We are not voting for Oyetola but the future of Iwo to have a chance at governorship. We’ve never had it and we want to have it in 2026.”

Previous: I have offered an opportunity for South East to be relevant politically- Kwankwaso
Next: INEC denies operating polling units in Niger Republic