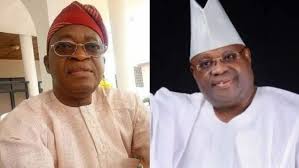 The Peoples Democratic Party (PDP) in Osun state has berated the All Progressives Congress (APC) for the violent nature of its political activities.

According to the party, any move to blame it for the attack on the campaign train of Governor Adegboyega Oyetola would be a sign of desperation.

The party, which made this known in a statement signed by Sunday Bisi, Director-General, PDP State Campaign Council, and made available to DAILY POST on Tuesday, also warned the ruling party not to turn the State into a war zone.

The PDP, while sympathising with the injured journalists who were covering the Oyetola electioneering campaign, alleged that the Osun APC had a history of violent attacks due to their intra-party feud.

According to the statement, “The State APC has unenviable records of more than ten intra-party violent incidents involving gun assaults and deployment of factional thugs openly endorsed by various forces within the party.

“We wonder why Senator Ajibola Bashiru is engaging in a blame game.

“We call on the APC not to compound the challenges facing the good people of Osun State. The least Governor Oyetola could do for Osun State is to leave in peace when he is voted out in July. His deliberate arming and sponsoring of thugs is reprehensible. His plan to sew police uniforms for miscreants is the height of irresponsible state conduct.

“As a party, we assure the general public that our members have nothing to do with the incident. It is a known fact that the PDP, unlike the APC do not harbour thugs.”

Osun PDP alleged that its findings of what transpired on Monday revealed that trouble started when loads of thugs in the company of Governor Oyetola tried to intimidate the people of Gbongan by shooting sporadically into the air.

“However, the people of Gbongan refused to be intimidated and mobilized to counter what seemed like a needless attack on them by hauling stones at the convoy,” he claimed.

The party, which acknowledged that the attack was unfortunate and avoidable, added that it was shameful that Governor Oyetola and the APC chose the dishonourable route of blaming the PDP in order to hide the truth.

“We must warn that our party will not tolerate ridiculous lies against it. We want to alert the general public to be wary of APC’s shameless antics to curry undeserved sympathy. Our party is peace-loving and we have demonstrated this much in the last twelve years as an opposition.