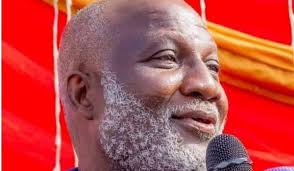 Ahead of the Osun gubernatorial election, the residence of the Labour Party candidate, Lasun Yusuff was under attack by gunmen on Monday morning.

The Ilobu born politician made this disclosure himself through his verified Twitter handle on the early hours on  Monday morning.

It was gathered that no life was lost on the attack as security operatives stationed at his house gallantly repelled the attack.

The Tweet reads: “Just in: gun men in uniforms are presently in my residence shooting sporadically.

In a related development, the Governor of Osun State who is also the governorship candidate in the in the July 16 electionG overnor Adegboyega Oyetola, has pleaded with the electorate that they should give him the chance of another four years, saying that four years is not enough to complete the tasks and projects he has started.

The Governor made this plea during his opening statements at the Osun Governorship Debate 2022 where he participated with other candidates.

He said: “Four years is not enough,” Oyetola argued while urging the people to give him their support one more time.

Previous: 2023: Tinubu settled for Muslim-Muslim ticket because opposition is not united- Activist
Next: No big deal about Muslim-Muslim Ticket, it shouldn’t cause controversies- Yakasai