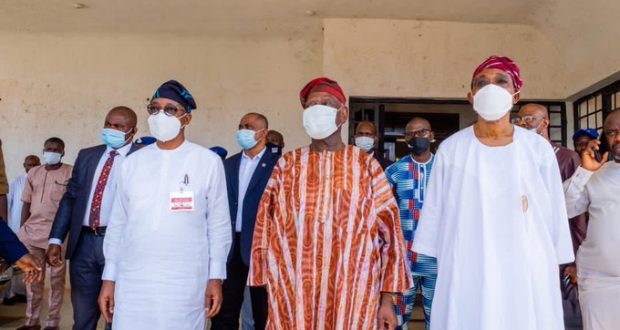 The fear that political crisis may erupt in Osun state was allayed today as ex-Osun State governor, Rauf Aregbesola, omet with his successor, Adegboyega Oyetola, and former Governor of the state , Bisi Akande, in Osun State.

Prior to this development, tension had been soaked in the state as both Aregbesola and Oyetola were allegedly planning to have different political events in the same day.

However, Aregbesola’s event was cancelled as part of move to douse the tension..

Both Governor Oyetola and Aregbesola kept sealed lips on the matter despite the alleged cold war between the two political gladiators.

Stating his mission in Osun, Aregbesola who is the Minister for  Interior said he came to the state to have Stakeholders’ Engagement Meeting on security issues.

In his tweet, Aregbesola said “Earlier today, I arrived at the @StateofOsun with my entourage from the @MinofInteriorNG to begin my Stakeholders’ Engagement Meeting with different stakeholders in the state as directed by President @MBuhari.

“Our entourage paid a courtesy visit to our leader and father, Baba Bisi Akande, alongside Governor of the @StateofOsun, Alhaji Gboyega Oyetola in Ila Orangun. Baba advised us on #EndSARS and insecurity amongst other issues!”

Previous: Lai to NEF: Buhari won’t resign, he will complete his tenure
Next: 2023: This is constitution of common sense, power should come to South- Shekarau