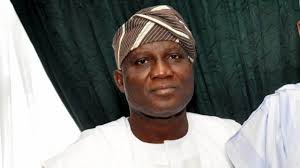 Ex-Deputy Speaker of the Representatives, Lasun Yusuf has moved his political gear to the Labour Party ahead of the Osun State Governorship election.

The federal lawmaker is contesting under the platform  in the forthcoming electoral process.

It will be recalled that Yusuf recently dumped the All Progressives Congress after losing out in the party’s primary election.

Recall that he plan to leave was materialized after  had submitted his resignation letter on Friday, March 25, 2022, at the Osun APC Secretariat in Osogbo.