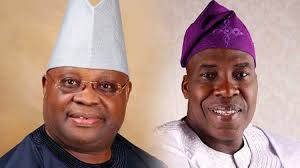 The crisis bedeviling the Osun State chapter of the People’s Democratic Party (PDP)  has taken another dimension due to the emergence of two governorship candidates: Senator Ademola Adeleke and Dotun Babayemi in the primary election on Tuesday.

It will be recalled that Adeleke, a former Osun West Senator, was declared winner of the primary election backed by the party’s national working committee, Babayemi emerged candidate of the Olagunsoye Oyinlola-backed faction of the party.

The primary  which produced Adeleke, was  held at the 10,000 capacity Oshogbo stadium.

It should be noted that the dancing Senator was also the PDP’s flagbearer in 2018 when he lost to incumbent Gboyega Oyetola of the All Progressives Congress in controversial circumstances..”

However, the Oyinlola-backed faction held its primary on Tuesday at the WIDCOF event centre in Osogbo that same day

But PDP NWC said it was not aware of such a primary.

“I am not aware that there was a parallel primary. We have a letter signed by our party’s National Working Committee constituting our election committee. And we are complete,”Abiye Sekibo told Channels TV.

The parallel primaries came on the back of factional leadership of the PDP in the state.

Previous: 2023: APC must not misuse its chances, says Akeredolu
Next: Convention: Sen Adamu will destroy the fortunes of APC if elected Chairman- Group