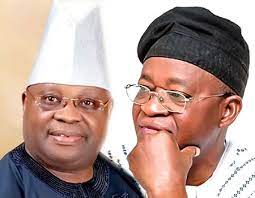 Osun Guber: I won’t allow 2028 rigging to repeat itself- Adeleke

In the heat of preparation for the 2022 gubernatorial election in Osun State, the two top contenders in the political duel, Osun State Governor, Adegboyega Oyetola of the All Progressives Congress (APC) and Senator Ademola Adeleke of the Peoples Democratic Party (PDP) have both boasted victory.

Speaking, Adeleke  promised that he was committed to a violence-free campaign and free and fair election.

Both of them spoke revealed their minds when they hosted   a delegation of the Government of the United States of America, led by US Embassy Political and Economic Chief, Brandon Hudspeth.

In his own words, Oyetola boasted that the APC remained the party to defeat as it prepares for the guber contest, promising the US government delegation that the State is looking forward to a credible election.

On his part, the PDP guber candidate, Adeleke revealed lamented how he was allegedly rigged out in the 2018 Osun guber election, Adeleke maintained that he will not allow history to repeat itself.

“The major threat to survival of democracy in Africa and Nigeria in particular are election rigging and political violence. The electoral process is under threat from merchants of violence and election riggers. They are scared of people’s voices, so they invest only in violence and manipulation. The international community must ensure there is consequence to deter these threats to democracy.

“Our people are determined to restore the 2018 stolen mandate. This time around, our margin of victory will be so strong that election riggers will fail in their evil plans. What we advocate and seek support for is free and fair elections,” he said.

Brandon Hudspeth said that the US government is ready to partner with the Osun Government to deliver credible elections during the July 16, 2022 guber poll.

He noted that the team would be meeting election stakeholders in the State ahead of the 2022 gubernatorial poll.

Hudspeth explained that, “The reason we are here is because of the forthcoming election in Osun State in July, this year.

“We hope that the election will be free and credible, because there are expectations within and outside this country over the forthcoming election in this State.