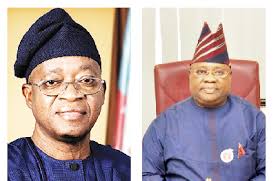 Ahead of Osun State gubernatorial election, the New Nigeria Peoples Party (NNPP) has debunked news being bandied around that it was in alliance with other political parties.

The intimation was contained in a press statement signed by Tosin Odeyemi, the Osun chairman of the party and made available to newsmen on Wednesday in Osogbo.

Odeyemi revealed that the party has a bright future in the political landscape of Nigeria.

He also maintained that Osun NNPP is confident of winning the forthcoming Osun gubernatorial election and the 2023 general elections.

While noting that it is a jittery party that will be looking for other political parties to hang with, Odeyemi hinted that “Osun NNPP is sure of victory as the majority of Osun masses were tired of the two leading political parties in Nigeria.”

“Osun people and Nigerians generally are tired of both PDP and APC, thereby looking for an alternative which so many people have found in the NNPP.

“I can say it authoritatively that our party is not in alliance talk with any political party, either for the Osun gubernatorial or the general elections,” he said.

Previous: It is very hard to find a leader like Yaradua- Jonathan
Next: Ebonyi 2023: Political uproar as gov Umahi announces successor