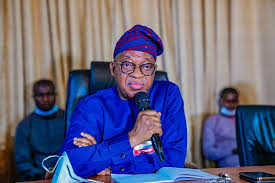 Osun State governor, Adegboyega Oyetola, has filed a 1,240-page petition before the tribunal sitting at the State High Court, Osogbo.

Oyetola, who is the governorship candidate of the All Progressives Congress (APC) in the July 16 election, approached the tribunal to challenge the declaration of Senator Ademola Adeleke of the Peoples Democratic Party (PDP) by the Independent National Electoral Commission (INEC), as winner.

Oyetola and the state Chairman of the APC, Prince Gboyega Famodun, jointly signed the petition.

The APC had hinted that it would approach the tribunal to challenge the election, saying that the legal team of the party had assured them that they have a good case.

When contacted, the lead counsel of the APC, Rasheed Adegoke SAN, confirmed to Saturday Sun that the petition has been submitted expressing hope that the party would be victorious at the tribunal.

Adegoke SAN had earlier stated that about 50 lawyers, including Saka Layonu SAN, had signified the intention to appear for Oyetola and the APC

Previous: Top PDP chieftain in Lagos, Gbadamosi, dumps party for LP
Next: I will do all within my power to ensure Tinubu’s victory- Lalong vows