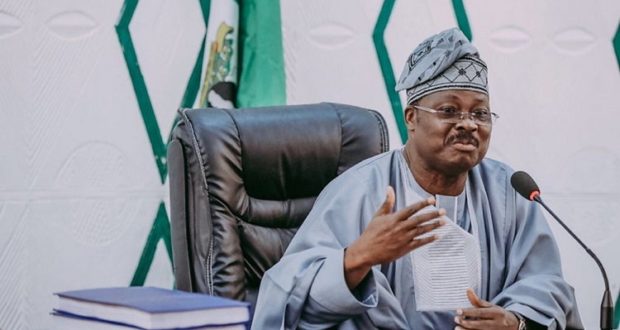 A prominent indigene of Oyo State, Prof. Dibu Ojerinde, has warned members of the All Progressives Congress (APC) to stop protesting against the nomination of former Gov. Abiola Ajimobi as Deputy National Chairman (South) of the party.

He made the call in a statement he personally signed and made available to newsmen in Ibadan.

Ojerinde, a Professor Emeritus of Tests and Measurement, was also a former Registrar of the Joint Admission and Matriculation Board (JAMB).

Ajimobi was nominated by some leaders of the party to succeed Chief Adeniyi Adebayo, the current Minister of Industry, Trade and Investment.

But Ajimobi’s nomination had generated heated arguments and protests by some members of the party in the state.

Some notable leaders reported to be opposed to Ajimobi’s nomination are Chief Moses Adeyemo, the deputy governor in his administration, Alhaji Akin Olajide, his former SSG, Sen. Adesoji Akanbi and his former aide Alhaji Fatai Ibikunle, among others.

Ojerinde, however, described the protests against Ajimobi’s nomination for the top party leadership job as unnecessary and ill-conceived.

He said Ajimobi’s nomination was the brainchild of eminent APC stakeholders from virtually all the five other South Western states as a matter of political exigency.

“The former governor may have inevitably offended some of these people while in office and I understand this was also responsible for the crisis which engulfed Oyo APC in 2018.

“The crisis was allowed to drag on until the party lost the governorship seat to the Peoples Democratic Party (PDP) in the 2019 general elections.

“But these same elders and leaders should find a way of resolving this among themselves once and for all in the interest of their teeming members and the state,” he said.

Ojerinde said that such grievances ought not be allowed to cost the APC leaders the coveted governorship seat or sustained in the interest of the party and the society at large.

“I am using this medium to appeal to other concerned individuals or groups to bury all the hatchets permanently. In the opinion of many political watchers, the seemingly intractable crisis within Oyo APC is inimical to the progress of the state.

“This is simply because the party can boast of many quality hands who are capable of adding value to the state and Nigeria as a country if afforded the opportunity to work together as a team and not as warring entities,” he said.

He appealed to every stakeholder within the party to work toward finding lasting solution to the internal wrangling and guard against anything capable of causing schism.

“All hands must be on deck to restore the full confidence of the voting public on the progressive party which was still able to have a comfortable majority of National Assembly seats in the state despite all odds in 2019,” he said