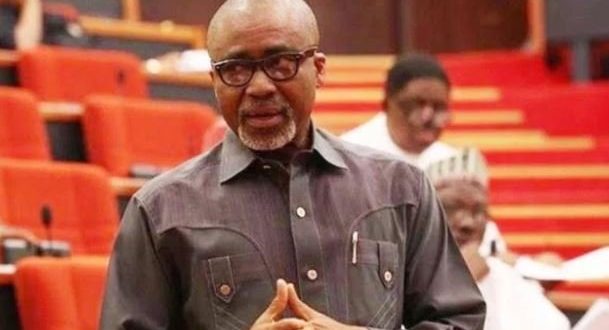 The Labour Party in Ogun State has accused the Senate Minority Leader, Senator Enyinnaya Abaribe of contributing to insecurity in Nigeria in concert with PDP.

The party was reacting to a recent call by Abaribe that President Muhammadu Buhari should resign his position as result of the rising cases of insecurity in the nation.

In an intervew in Abeokuta on Sunday, the Chairman of the Labour Party in Ogun State, Comrade Abayomi Arabambi, said “Abaribe is a widely acknowledged integral pillar of the very many conspiracies that are flying.”

Arabambi said Abaribe and the Peoples Democratic Party were “financing and generally promoting insecurity in the country with very full and highly adequate logistics.”

The Labour Party said the call on Buhari to resign was a well orchestrated plan by Abaribe, the PDP and some paid media, to frustrate Buhari out of office, The Nation reports.

Arabambi maintained that the “arranged and choreographed call on PMB to resign on the floor of the Nigerian Senate for the given reason of national insecurity must be properly understood and rightly situated.”

He informed that Abaribe, who made the call, must first be exposed for who he is and his objective in respect of the “unpopular call” he made.

His words: “The man Abaribe is a widely acknowledged integral pillar of the very many conspiracies that are flying, financing and generally promoting insecurity in the country including very full and highly adequate logistics. It is this choreographed call that is programmed to escalate beyond reason, the issue of National insecurity and thus keep same on a very dangerous and hysterical level.

“For the crowd of these highly placed and nationally visible conspirators, the plan was to let Abaribe open the machine of the insincere pretence and concern on the floor of the Senate and their political party, PDP to latch onto the call for the paid and bought class of the Nigerian print and electronics media that are struck, stuck and frustrated with the bitter mourning of the ‘brown envelopes’ stopped by the PMB-led APC government, now seen by them as deserving of a bad and even the worst press. They are part of the conspiracies aimed at warring PMB and his highly performing government.

“As a foregone corollary, it was assumed that the ever-supporting internet hyenas of stomach-infrastructure beneficiaries and other daft and gullible political marionettes will blow and blow the “call” up to a level that will frighten the government to resign. However and fortunately for the ‘God-sent’ PMB and his truly performing government, the call didn’t attract the kind of reception the national enemies envisaged.

“The bottom of the reasons these enemies of the nation are this busy and devilish is their avowed intention of blackmailing PMB into a position that Nigerians will certify him a failure with so much passion that will outshine the experience of former President Goodluck Jonathan, thus opening the way for the morally dead PDP to try to win the federal elections and resume their interrupted blind looting of the nation’s treasury. God being God, the plan failed even before it began.”

Speaking further, the Ogun Labour party took a swipe at the person of Abaribe, saying: “Let us even take a look at the man who made the very unpopular call Sen. Abaribe, is he one who came to equity with clean hands? A big capital “NO”. He is a man, who as a Deputy Governor, had to be impeached twice because he had a strong connection of the diabolical, amoral and stinkingly rich in high places, including the Presidency then.

“Here is a man who volunteered and stood guarantee for the “notorious terrorist leader” of the officially proscribed IPOB and at the end facilitated the escape of the “high-wired criminal” from Justice. He has proved so many times over that the security to lives and properties in the nation is unimportant in his scale of priorities.

“His preference is the bringing to reality, a ‘stealing PDP government’ once again to continue from where they were stopped in their wicked, insensitive, arrogant and selfish looting of the national treasury.”

The Ogun Labour party added that Abaribe’s call for Buhari’s resignation is one dangerous and evil attempt to once again push Nigeria into unrest.

He emphasised that the call must be seen by all patriots as an attempt to trouble the national well-being of themselves and children, even the unborn ones.

“We in the LP in Ogun State condemn this atrocious and evil call by the PDP and its paw, Senator Abaribe, in very strong terms,” Arabambi stated