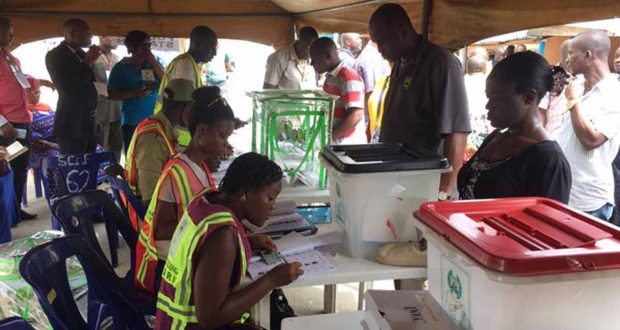 The Peoples Democratic Party (PDP) in Kwara has accused the All Progressives Congress (APC) of perpetrating massive rigging and other electoral frauds during the Saturday local government elections in the state.

Kwara PDP chairman, Iyiola Oyedepo said this on Saturday while reacting to the conduct of the election.

Meanwhile, the state’s Police Commissioner, Lawan Ado, who led the Security Committee for the election, expressed satisfaction with the conduct of the council elections.

Coalition of result from various 193 wards in the state are currently in progress.

Unlike previous elections held in the state, the Saturday’s Local Government election took place simultaneously with accreditation and voting.

Also, Police Public Relations Officer (PPRO), Ajayi Okasanmi, when contacted said he was not aware that ballot papers were being thump printed inside Police vehicle anywhere in the state.

“I have no record of such incident or other electoral fraud from anywhere in the state, so I cannot comment or speak on it,” Okasanmi said.

“To the best of my knowledge, the police provided adequate security during and after the election across the state.

Buhari said the election went well in the state, adding that PDP was just crying wolf where there was none.

Previous: Odigie-Oyegun in Uyo, says Buhari working hard to turn things around for better
Next: I will fulfill all my promises before 2019, Wike assures Rivers community