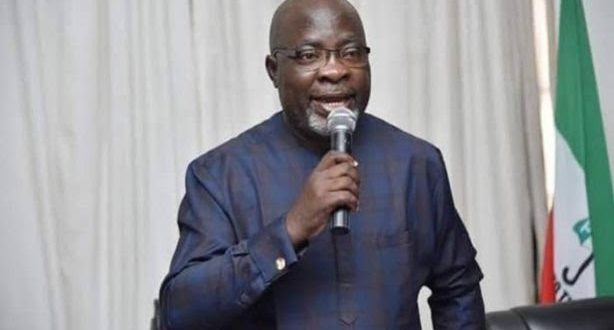 The Peoples Democratic Party, PDP, has lampooned President Muhammadu Buhari for delegating the announcement of the extension of gradual lockdown ease to some somebody else.

Boss Mustapha, Secretary to the Government of the Federation, SGF, had yesterday announced the extension in Abuja, Lagos and Ogun States due to the continued rise in COVID-19 cases.

Mustapha had made the announcement on behalf of the president during yesterday’s daily briefing of the Presidential Task force on COVID-19 in Abuja.

Recall that the SGF had over the weekend informed Nigerians that Buhari will on Monday issue new directives regarding the COVID-19 lockdown.

The President, however, failed to address the nation, rather directed Mustapha to announce the new directive on his behalf.

However, PDP faulted the assumption of presidential powers by Mustapha, to announce an extension of lockdown and curfew in Nigeria.

In a statement by its spokesperson, Kola Ologbondiyan, the opposition party said Mustapha’s action has brought so much confusion in Nigeria’s polity.

The opposition party charged the president to put an “end” to the confusion by addressing Nigerians.

PDP stressed that Buhari’s decision was an abuse of power.

The statement reads: “Our party points out that nowhere in our laws are the powers to broadcast Presidential executive orders to declare curfew and restriction of movements vested in the Office of the SGF.

“The action of the SGF has brought serious confusion in the polity regarding the legality or otherwise of the directives contained in the SGF’s announcement.

“Such powers are vested in the person and office of Mr. President and not exercisable by proxy, directly or indirectly; which makes the action of the SGF a recipe for serious constitutional crisis in our country.

“Our nation is a state governed by dictates of the law, particularly in the exercise of powers vested in statutory offices, especially that of the President.

“The PDP holds that the announcement by the SGF is, therefore, another manifestation of abuse of our statutory offices arising from the abdication of responsibilities by President Buhari since the last five years, which had also become more pronounced in this fight against COVID-19.

“Our party, therefore, invites Mr. President to end the confusion in the polity, arising from the action of the SGF, by immediately addressing Nigerians in his official capacity to fulfill the demands of our laws in respect of the necessary protocols on restrictions and other management procedures in the fight against the spread of COVID-19 pandemic in our country