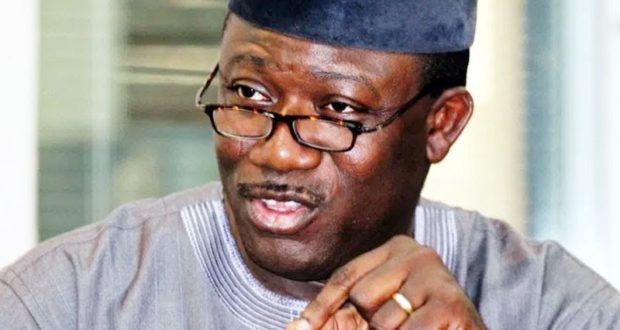 The party flayed  the Governor over his claim that 5,000 indigent citizens drawn from 16 council areas of Ekiti State received between N20,000 and N60,000 each on Tuesday, under the federal government.

The group noted that; “Only spirits could have counted and distributed over N150 million cash to 5,000 people in Ekiti State in just one day.

”With what did they count over N150 million in one day? Even with three counting machines, N150 million cannot be counted in one day, not to talk of manual counting.”

In a statement on Thursday by the PDP-NNMG Ekiti State Coordinator, Bola Agboola, it was fraudulent for any government to go about sharing cash to the tune of N60,000 to people.

He added that the claim that 5,000 people received between N20,000 and N60,000 each in Ekiti State cannot be substantiated by anyone.

The statement read; “There are 177 wards in Ekiti State and with that figure of 5,000 that they gave; it implies that not less than 27 people got the money in each of the 177 wards.

“If we take a town like Igede Ekiti, Irepodun Ifelodun Local Government, for example, it will mean that 81 people got an average of N30,000 each, totaling N2.43 million. Is it possible for N2.43 million cash to enter Igede Ekiti in one day and the impact will not be felt in the whole town?

“Ado Ekiti, the State capital has 13 wards and if 27 people received an average of N30,000 cash in one day, it will translate to 351 people getting over N10.53 million in just one day. Even if the beneficiaries were only members of the All Progressives Congress (APC), the impact will still be visible.

“In this instance, where are the 5,000 people that Governor Fayemi said he gave N150 million cash to? Are they ghosts? Where are the records?

“Governor Fayemi must, therefore, produce records of those 5,000 ghosts that he claimed got over N150 million cash on Tuesday.