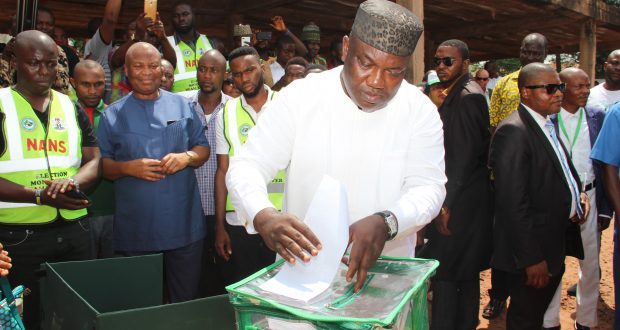 The Peoples Democratic Party, PDP, has swept all Chairmanship positions in the 17 Local Government Areas of Enugu.

The Enugu State Independent Electoral Commission (ENSIEC) made the declaration.

The PDP also swept 259 of the 261 councillorship positions.

Election did not however hold in Obioma and Eke communities within Udi council area.

The Chairman of ENSIEC, Mike Ajogwu, announced the results at ENSIEC headquarters in Enugu on Sunday.

Ajogwu, who is also the Chief Returning Officer for the poll, said: “So far, so good, the election had been credible, free and fair from ENSIEC assessment.

“I want to thank both the media, security agencies and Enugu residents for making it a huge success.

“I thank God no life was lost during and after the election.”

The major two contending parties at the council election, which was conducted throughout Enugu on Saturday, November 4, were the PDP and All Progressives Congress, APC.

THE RESULTS AT A GLANCE