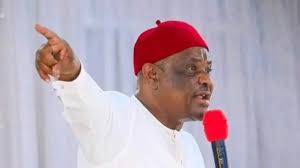 Rivers State Governor Nyesom Wike and his allies in the Peoples Democratic Party (PDP) were locked in a strategic meeting in Port Harcourt last night.

The meeting was convened by the Ayu-must-go movement to review developments in the opposition party following the contentious vote of confidence passed in Dr. Iyorchia Ayu as national chairman by the National Working Committee (NWC).

Wike and his group have rejected the lopsidedness in the leadership of the PDP and asked that the chairman should step aside to allow a Southerner take charge.

The Nation learnt that the late night session was summoned by the Rivers governor. Expected were his strategists and backers, including some governors and chieftains of the PDP.

According to The Nation newspaper, the governor’s camp has six options namely. They include:

•To accept the status quo and cooperate with the party’s presidential candidate, Atiku Abubakar;
•To insist on the sack of Iyorchia Ayu and be uncommitted to 2023 poll if Atiku refuses to bow to pressure;
•To remain in the party and work against it;
Go into covert alliance with the ruling party to prove its strength as a Caucus in PDP;
•To leave the party; and
•To refuse to fund the party at all levels.

It was uncertain which of the options Wike will choose up till this moment.

A source in Wike’s camp said: “Wike group is meeting tonight to take a major decision.”