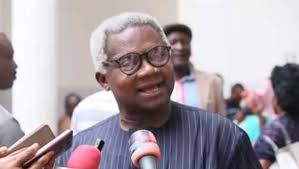 PDP has lost foresight, now behaving has a Nollywood cast

A top stalwart of the All Progressives Congress (APC), Mr. Osita Okechukwu, has declared that the main opposition Peoples Democratic Party (PDP) is demonstrating monumental lack of foresight even in opposition.

Okechukwu said as a major opposition p the PDP “has continued to entertain Nigerians with tales by moonlight as if it is a Nollywood cast”, stressing that “there is nothing about the party that suggests any serious challenge to the governing party.”

Speaking to journalists lamented that the opposition party was awaiting its final disintegration as predicted by former Vice President Atiku Abubakar recently.

The Director General of Voice of Nigeria (DG, VON) described the PDP governors’ meeting at Aba as a jamboree, noted that their allegation that APC is unfit to participate in the 2023 general elections was wishful thinking.

He stated: “No matter how you look at it, PDP knows they are responsible for the petrol, diesel crisis, and the collapse of the national grid. The collapse of Nigeria’s electricity infrastructure is the culmination of PDP’s 16 years of monumental corruption and financial recklessness.

“Is PDP still insisting on behaving as a Nollywood cast? For God’s sake, PDP should forthwith desist from play-acting, because the party cannot like Pontus Pilate wash its hands off from the material conditions it created, which drove Nigeria into World Poverty Capital, palpable insecurity, biting petrol and diesel scarcity and collapse of national grid.

“Yes, we made some unforced errors; however Nigerians now know better, and are wise enough to remember PDP’s motto – ‘Share the Money’. Instead of using the Oil Windfall to fix infrastructure in sixteenth years, they resorted to sharing the money. That’s the infrastructural deficit President Buhari has been borrowing to fix.”

The DG VON said the PDP “tied President Muhammadu Buhari’s hand by the hanky-panky corruption in electricity generation and distribution value chain called privatisation project. That let down rendered the Siemens overhaul exercise useless and continues to hinder the successful take-off of the Mambilla power project.”

“PDP tied President Buhari’s hand of unbundling the electricity value chain by corrupting the privatisation process. The agreements they had was akin to that of tenant writing agreement for the landlord which in this instance is the Federal Government of Nigeria then led by the PDP. The outcome today is the poor performance of Distribution Companies (DISCOs) nationwide.

“Or do we forget how the billions voted to procure military hardware were siphoned by PDP top dogs for personal gains? It pains one when people allege that APC and PDP are the same. This is a wrong allegation for APC devoted resources to physical and social infrastructure and unprecedented agrarian revolution. Whereas PDP shared money,” Okechukwu stated.