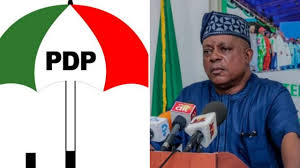 The Peoples Democratic Party Governors Forum is meeting today in Abuja to deliberate on a number of urgent issues affecting the political group.

A statement, yesterday, by the forum’s Director General, C.I.D Maduabum, said that the chairman and governor of Sokoto State, Aminu Tambuwal, after consultation with his colleagues agreed to convene the meeting.

The brief statement reads: “Chairman of the PDP Governors Forum, Rt. Hon. Aminu Waziri Tambuwal, in consultation with his colleagues has summoned an emergency meeting of the forum for Thursday, August 26, 2021 at 5:00p.m. The meeting will discuss recent developments in the PDP.

“The governors enjoined all PDP members and stakeholders to exercise patience as efforts are being made to ensure continued stability of the party in the days ahead.”

Sources hinted that the meeting became imperative to immediately resolve the leadership crisis besetting the party.

The gathering would take a final decision on when the National Executive Committee (NEC) meeting is holding.

“The failure of the suspended National Chairman, Prince Uche Secondus, to convene the NEC meeting was one of the issues that worsened his travails.”