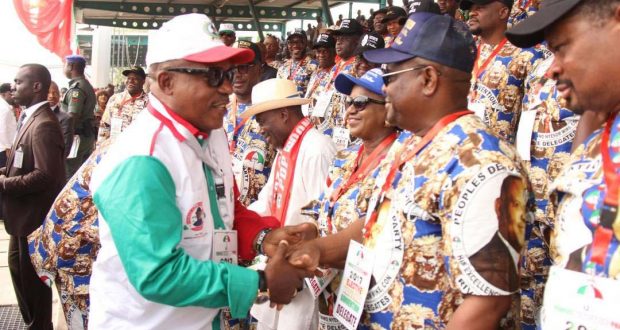 PDP is a party with corruption deeply rooted in its DNA, says APC

The All Progressives Congress (APC) has said money-for-votes and systematic rigging was brazenly perpetuated during the just concluded National Convention of the Peoples Democratic Party.

At least one Chairmanship candidate, Tunde Adeniran, has called for the cancellation of the election.

“In reacting to revelations of how money-for-votes and systematic rigging was brazenly perpetuated during the National Convention of the Peoples Democratic Party (PDP), the All Progressives Congress (APC) is mindful of the popular axiom: “A leopard cannot change its spot”.

“The abnormalities that trailed the PDP National Convention, have further exposed the PDP as a Party not ready and willing to change. Indeed, the PDP has once again displayed itself to the generality of Nigerians that it is a Party with corruption deeply rooted in its DNA,” part of the statement read.

The ruling party also described the situation as tragic that “the PDP which used to pride itself as “the biggest political Party in Africa” has now been reduced to a regional party.

“By frustrating South West Chairmanship candidates, it is unfortunate that the PDP has decided to punish the South West for not voting for the Party in 2015.

We urge members of the PDP that can pass the integrity test to join the APC so that we can together bring about the much-needed Change the country deserves.”

Previous: It’s a surprise that even an election as organised as this, somebody will still cry – Wike
Next: See photos of #PDPConvention2017 captured by politico.ng