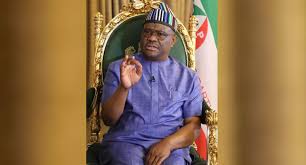 There is fear in the Peoples Democratic Party (PDP) over the romance of Rivers State Governor Nyesom Wike with the ruling All Progressives Congress (APC) and the Labour Party (LP).

Wike’s hope to become the running mate of the PDP’s presidential candidate, Atiku Abubakar, was dashed on June 16 when the latter picked Delta State Governor Ifeanyi Okowa against the recommendation of the party’s advisory council on the running mate selection.

The council had reportedly recommended Wike who came second at the May 28 presidential primary with 237 votes against Atiku’s 371 as the running mate.

According to Daily Trust, many  sources in Wike’s camp said he had been livid with the way he was ‘edged out’.

Since Atiku picked Okowa, Wike has been romancing with chieftains of the APC and the LP.

This is believed to have made Wike’s private residence located at Ada George Road in Port Harcourt a beehive of activities.

First to have visited Wike was Ebonyi State Governor David Umahi on Sunday, followed by a former governor of Anambra State and presidential candidate of the Labour Party, Peter Obi, on Wednesday. Bauchi State Governor Bala Muhammed has also visited him.

It was gathered that Umahi and Obi’s visits were to woo Wike to their parties; while that of the Bauchi State governor was to placate him.

Since he lost the PDP’s presidential ticket and the position of the running mate, Wike has not made any public statement.

An ally of Wike said his anger was amplified when Atiku and the party jettisoned the recommendation of the advisory council.

He said: “We’re weighing all options. It’s unfortunate that the party that refused to implement the recommendation of its committee on running mate will be talking about constituting a reconciliation committee. Who will take them seriously?”

He said a crucial meeting of the Wike’s camp earlier scheduled for this week had been shifted to next week. “All options are being weighed,” he repeated.

Another source close to Wike said he was still angry with the way he was treated by the party leaders during the selection of the running mate.

“The Bauchi governor was sent by Atiku and his group to appeal to Wike not to leave the PDP; while Ebonyi governor and Peter Obi visited to see how they could woo him to join their political parties.

“His silence on national issues has sent jitters across the PDP’s family and they’re not comfortable. They’re afraid that having treated the governor badly, he might defect to another party. That was why the Bauchi governor came to appeal to him on behalf of Atiku,” the source said.

Wike’s media aide, Kevin Ebiri, said there was no official statement on the visit of high-profile politicians to his boss.

Reacting, Debo Ologunagba, the national publicity secretary of the PDP said there was no crisis in the party.

He said the party was united and approaching the coming elections as a united front.

“We should be concerned about the country, there’s no crisis in the PDP and if anybody goes to visit Wike, it’s normal, he is a leader in this party. In this party, we don’t work with allegations, we work with facts. PDP is strong and we’re ready for the election.

“Governor Wike is a phenomenon in this party, a party man to the core, a pillar of this party from the beginning to now. We’re a party, a family. In a family, you can have differences, but that does not make it a crisis, there are no issues there. When there are differences, we resolve them and we have a structure within our party that is so robust that takes care of our differences,” he said.