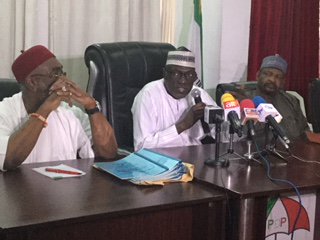 A commitment to peace has been signed by all aspirants for the position of the National Chairmanship of the Peoples Democratic Party (PDP). This is meant to ensure a successful and violent free National Convention on December 9.

The National Chairman, PDP National Caretaker Committee, Ahmed Makarfi, at the occasion held at the party’s National Secretariat, Abuja, advised contestants in the electives positions to reduce hardship of the Convention.

He said that though the party is not averse to consensus, it would not impose any candidate or force any decision on anybody.

Makarfi said “Yes, we want the Convention to be transparent, free and fair.

“We also want the Convention to be conducted in good enough time because keeping delegates for two days will be big issue.

“So, it will be in order if people talk among themselves, especially where lower positions can be resolved at home by contending forces, so that those positions that are highly competitive, maybe the one that we involve elections.

Makarfi described the peace accord as basically a code of conduct” and idea of the contestants.

He added that the event had confirmed pledge of the aspirants to work together and support whoever wins.

He also denied rumours that PDP governors and party leaders wanted to impose an aspirant, saying their focus is how to go into the Convention in unity and come out as one family.

Rasheed Ladoja, speaking for the eight aspirants, assured that the Convention would be smooth, would not break the party or cause member to defect from PDP.

He said that all the aspirants had been working to ensure that their supporters “do not heat the polity.”

Meanwhile, Bode George, who was the only aspirant not present at the occasion according to Makarfi, had sent his apology and promised to sign the peace accord as soon as he is back in Abuja.

He further added that “no aspirant shall leave the Party or encourage his or her supporters, promoters etc to do so, as a result of the outcome of the National Chairmanship Election at the elective National Convention.

Previous: There is more to car gifts to Adebayo, Oni, to the exclusion of Fayemi – Oni’s Aide
Next: I am a son of nobody who became somebody without knowing anybody – Ndume