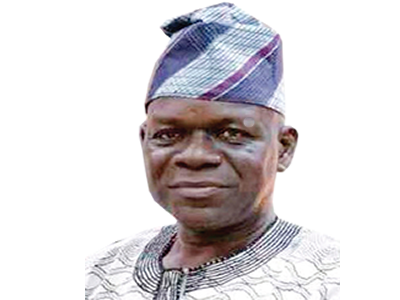 The Chairman of Lagos State All Progressives Congress (APC), Tunde Balogun, on Thursday declared that the Peoples Democratic Party (PDP) was not destined to win the governorship election in the state.

He predicted failure for the opposition party in future polls, saying that its Lagos chapter can never match the ruling party.

Balogun spoke at the party office in Ikeja at a ceremony marking the defection of some PDP stalwarts into the party.

According to The Nation, the defectors included former member of the House of Assembly, Tajudeen Agoro, who went to the tribunal after he was defeated by Jide Jimoh of APC in the February 23 House of Representatives election in Mainland Constituency, Moyosore Ogunlewe, who was recently defeated in the House of Assembly election in Kosofe Constituency by Mr Sanni of the APC, Mutiu Okunola and some supporters of Semiu Kukoyi, who recently passed on.

A minute of silence was observed in honour of Kukoyi, a senator-elect in 1998, who could not be sworn in, following the liquidation of the late Gen. Sani Abacha’s dubious transition programme.

However, former Works Minister Seye Ogunlewe, who had earlier defected, was absent at the ceremony due to ill-health.

The defectors repudiated the PDP, saying that they abandoned the platform because it was in deep crisis.

While they were in the PDP, they fired salvos at the APC. Also, they were unable to proffer solutions to the multiple crises that enveloped the opposition party.

Sources said the defectors’ major reason for defecting was to contest on the platform of a winning party and halt their long years of futile political labour.

Observers contended that their defection was not motivated by any ideological consideration.

Okunola, who expressed satisfaction with the reception, said he defected to change the political narrative in Lagos.

He said: “They prevented Chief Obafemi Awolowo and Chief Moshood Abiola from becoming president. We will not allow them to deny another worthy candidate from the Southwest.”

Describing the defection as an “epic” ceremony, Balogun noted that many prominent PDP chieftains, including Senator Musiliu Obanikoro, Mrs Remi Adikwu-Bakare and Ogunlewe, have all bidden farewell to the failed party.

He said the defectors joined the APC, not because of winning election, but because of good governance.

Balogun said “Lagos was being transformed into a 21st Century state,” adding that Governor Babajide Sanwo-Olu is fighting the infrastructure battle.

The chairman, who noted that no APC chieftain had defected to the PDP, said the defectors will be given a sense of belonging.

He added: “PDP is not destined to win election in Lagos State. We are determined to obliterate PDP in Lagos. The defectors can become anything in the APC. You should join forces to work for the success of the APC.”.