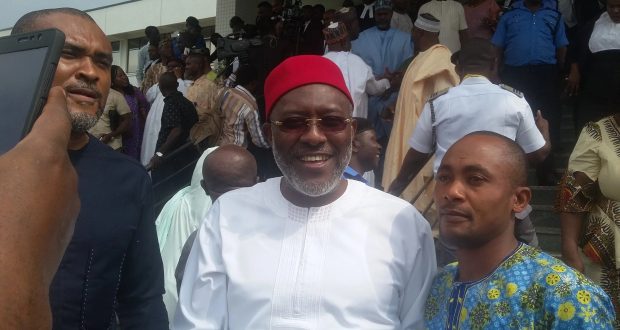 PDP has one of the best set of national leaders – Metuh

A former National Publicity Secretary of the People’s Democratic Party (PDP, Olisa Metuh, has described the party’s newly-elected National Working Committee (NWC) as “one of the best set of national leaders the party has ever produced’’.

Metuh told journalists, in Abuja that he was fully confident that the new NWC would lead the party to victory by 2019.

He said virtually all members of the NWC led by Uche Secondus were experienced in party management and politics, and were well prepared to serve the party.

“Also, the National Publicity Secretary, Kola Ologbodiyan, was a former editor of a newspaper. For the first time we are having a practicing journalist as our spokesman.

“We expect that he will excel. He is going to be one of the best publicity secretaries we have in PDP because he comes well prepared for the office.

“His deputy is also well known and experienced in the practice. I think this is one of the best NWC that we can have. We are happy with the members.

“Unarguably, this is one of the best NWC that we can have. The election worked very well, and we now have people who are equipped and ready to work for the interest of our party,’’ Metuh said.

Assessing the process of the convention, Metuh commended the Chairman of the Convention and Governor of Delta State, Ifeanyi Okowa, and his team for “good preparation, planning and execution’’.

He also commended the enthusiasm and excitement shown by party members, especially chairmanship aspirants who campaigned round the country.

Metuh said what the aspirants did was to arouse the passion and interest of Nigerians to again yearn for PDP.

“They went a lot of way to sensitise Nigerians. So, we must commend them.’’

On the outcome of the convention, Metuh said it was quite expected, being a delegates election, and unlike what the public was made to believe.

The former National Publicity Secretary said in delegates elections the target of aspirants should have been the delegates, adding “most of the aspirants who won targeted the delegates’’.

He said the delegates voted for those they thought had institutional memory and proven record in party administration. “That is what convinced them to vote for Secondus.’’

On the issue of zoning, Metuh said while the party recognised and recommended it in principle, zoning was never sacrificed on the altar of competence and merit.

He said the election was not conducted against the principle of zoning as no zone was actually denied anything.