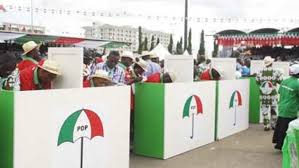 The primaries conducted by the  Peoples Democratic Party, PDP, for the state House of Assembly and the Federal House of Representatives in the  2023 elections in Akwa Ibom State went smoothly.

The list of those who will contest under the platform of the party has emerged.

The details on the winners was revealed at the end of the party’s primary elections held across the state on Sunday.

In the House of Representatives, Mr Ime Okon, a former member of the House of Assembly polled all the 62 votes to represent Ibiono/Itu Federal Constituency.

The immediate past Commissioner for Special Duties, Okpolupm Etteh would fly the flag for Eket, Esit Eket, Onna and Ibeno Federal Constituency.

Others who emerged include; Mr Unyime Idem for Ukanafun/ Oruk Anam Federal Constituency.

The current House of Reps member for Abak/ Etim Ekpo/ Ika, Mr Aniekan Umanah clinched the party’s ticket to represent the Constituency for the second time.

Also, for the state House of Assembly, the immediate past Commissioner for Trade and Investment, Prince Akpabio polled all the votes for Essien Udim,

Others include Godwin Ekpo for Ibiono Ibom state assembly, Jerry Otu for Ikot Ekpene/ Obot Akara, and Sunday Johnny to represent the people of Onna.