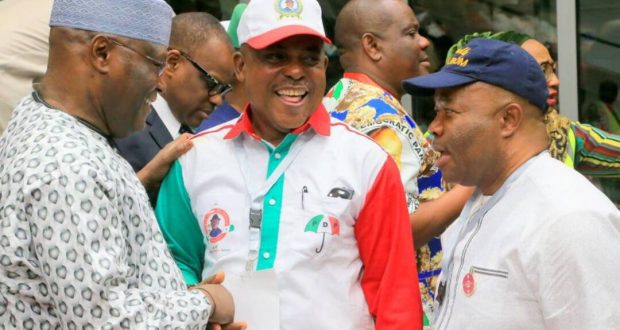 The new National Chairman of the Peoples Democratic Party (PDP), Uche Secondus is a 62-year-old politician from Rivers state, South-South of Nigeria.

Secondus is a man well-versed in party politics in Nigeria and looks very much prepared for his latest job.

In Rivers where he had previously done two terms as the State Chairman of the PDP, he is at home with the political leaders and the ordinary folks and is popularly called ‘Total Chairman’.

His strong connection with the likes of Nyesom Wike and Godswill Akpabio, the governor of Rivers and a former governor of Akwa Ibom respectively, has helped him to extend his political influence to the entire South-South and the nation at large.

The foundation of Secondus’ victory at the Eagles Square, Abuja, could be attributed to the duo of Rivers Governor, Nyesom Wike, Ekiti Governor, Ayodele Fayose, Senate Minority Leader, Godswill Akpabio, who are believed to have largely funded his campaign.

Secondus has been in politics in the last 39 years. He joined politics in 1978 during the Second Republic as the youth leader, in Rivers, for the now-defunct National Party of Nigeria (NPN).

He later became the state publicity secretary of another national party, the National Republican Convention (NRC) from 1993 to 1998.

As a businessman, he is said to have interest in Intels Nigeria Limited, a company that is linked to Nigeria’s former Vice President, Atiku Abubakar.

Secondus like most of his fellow party men, have had issues with the Economic and Financial Crimes Commission (EFCC), since Muhammadu Buhari became President. He was detained by the EFCC in 2016 for “illegally” receiving on behalf of the PDP 23 luxury vehicles valued at N310 million from the controversial businessman, Jide Omokore.

The court later declared his arrest unlawful and awarded N10 million damages against the EFCC.

During the May 2016 botched Port Harcourt Convention, Secondus wanted to contest for the Deputy National Chairman of the PDP but changed his mind that year and went after the party’s top job.

Previous: See photos of #PDPConvention2017 captured by politico.ng
Next: There will be peace in the North East when PDP returns to power – Ekweremadu