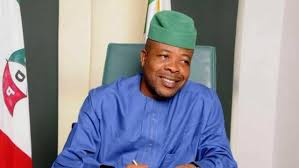 Ex-Governor of Imo State, Emeka Ihedioha, has said Senator Samuel Anyanwu, who represented Imo East, and the Peoples Democratic Party (PDP) are not the problems of the state.

According to him, the PDP in the state is one and remains a united family driven by a common purpose.

The former speaker and Deputy Speaker of the Federal House of Representatives said any attempt by fifth columnists to cause disaffection, especially among its leaders will not succeed.

It was reported that leaders of the Peoples Democratic Party in the South East on Sunday rejected what they called the imposition of Senator Sam Anyanwu as the zonal consensus candidate for the position of National Secretary.

Party leaders, who have voiced their rejection of the candidate include former Governors of Anambra State and Imo states, Peter Obi, Chief Achike Udenwa and Emeka Ihedioha, among others.

In a statement signed by his Media Aide, Chibuike Onyeukwu,the former governor noted that he had extended hand of fellowship and assured Senator Anyanwu of his support, that of Imo PDP and indeed his friends and associates across the country to emerge as National Secretary at the Convention and to succeed in office.

Ihedioha said, “My attention has been drawn to reports in the media purporting that I’m averse to the nomination of Senator Samuel Anyanwu as the consensus candidate of the Southeast for the position of National Secretary of PDP for the National Convention scheduled for 30th and 31st of October 2021.”

“The information is entirely misleading and should be disregarded.”

The release reads, “It is noteworthy that Rt. Hon Ihedioha, last Friday, had a meeting with Senator Anyanwu shortly after Thursday’s meeting of critical stakeholders of the PDP Southeast, held in Enugu.”

Let all issues, therefore be rested and nobody should play politics with it as it is not an issue in contest.

Reacting to the development, the Imo PDP Legal Adviser , Barr. Kissinger Ikeokwu urged PDP and its teeming supporters to disregard the naysayers as the party is united and working in one accord to make the party strong and virile to win elections in Imo State, come 2023 elections and beyond.

“The report in some sections of the media, purporting a disagreement at the Southeast Caucus was characteristic of such high level meeting to peacefully adopt its candidates by consensus rather than open contest at the PDP National Convention scheduled to hold at Abuja on the 30th day of October, 2021.”