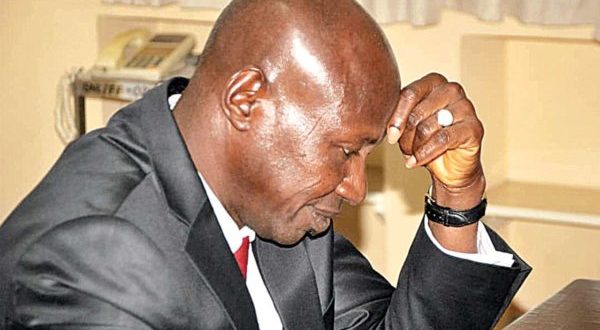 PDP to Buhari: Don’t attempt to interfer in Magu’s matter

Recall that the anti-corruption Czar was drilled by DSS yesterday over alleged infractions.

In a statement last night by PDP spokesman Kola Ologbondiyan, the party urged President Muhammadu Buhari to show the genuineness of his war against corruption by allowing unhindered investigation of Magu.

The party said Nigerians are already aware that Magu has been pulled in for questioning, adding that the fact that he has to be accompanied by an attorney showed that the said “invitation”, was beyond the routine.

It further stated that the development around the EFCC chair as well as the “desperate attempt” by the Commission to cover or wave off his investigation, only raised more integrity questions regarding Magu’s activities in the EFCC.

The statement said: “Only last month, the Attorney General of the Federation and Minster of Justice, Abubakar Malami, released a memo in which he indicted Magu of alleged diversion of recovered funds and fraudulent sale of assets seized by the EFCC

Previous: Akeredolu didn’t win in 2016, the poll was manipulated- Immediate past SSG
Next: Ganduje knocks PDP, says they are only interested in sharing Edo treasury