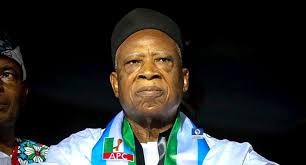 The National Chairman of the All Progressives Congress (APC), Abdulahi Adamu has called out the major opposition, the Peoples Democratic Party, PDP on its campaign tactics.

He said that the major opposition party is using the instrument of propagandist to smear the ruling party ahead of the 2023 elections.

He made this accusation when a team of  APC Professionals led by former Governor of Bauchi state, Isa Yuguda, paid him a courtesy call at the national secretariat of the party in Abuja.

According to Adamu, most of the programmes of the APC-led administration were not getting to the grassroots because of their low level of education.

His words: “One thing which I want to make some reference to is the fact of the position of your forum itself. If you listen to our political activities, one thing you may wish to take a serious look at and see how best you can be of some assistance to our effort is the activity of the party at the grassroots where it mattered most.

“Leadership at this level is being driven by those who are not educated, they are very vulnerable, very, extremely vulnerable.

“So, we need to imbibe the culture of an enlightened leadership driven by knowledge. We don’t all have to be graduates or diploma holders, but an enlightened mind is open and it is a bit narrow for now. This is missing in our effort to get people to appreciate who we are as a party, what we are doing as a party, how we can be appreciated as a party

“We are having the misfortune of the effort of this government not getting to the grassroots – positive publicity of what this government is doing. All that those who care to talk want to say is about the negative aspect of government

“We know that all over the world,the opposition is seen as the underdog and so there is apparent sympathy for them. I have no quarrel with this. Go and sympathize with them but call a spade a spade. Don’t give a dog a bad name in order to hang it.

Previous: Tinubu meets Shekarau to woo him to APC
Next: Loans: Buhari’s govt, the most corrupt in Nigeria’s history – PDP blasts APC