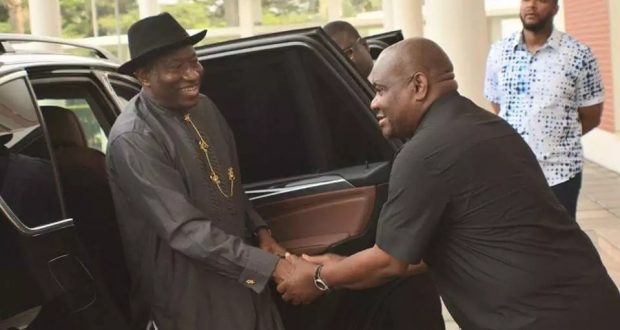 The People’s Democratic Party (PDP) would become solid after its Abuja convention, scheduled for December 9.

Former president, Goodluck Jonathan, expressed this optimism after his visit, on Sunday, to Rivers governor, Nyesom Wike, in Port Harcourt, the state capital.

He said that he was hopeful that, by Saturday, PDP would elect its new set of national officials. “God willing, we will go through the convention and the party will become solid. Now we have the National Caretaker Committee and when you are a caretaker you are not as strong as elected chairman.

“You know the party just went through challenges, luckily we passed the challenges through the pronouncement of the Supreme Court.

“Now we want to formerly elect the national officials of the party, who will lead us to 2019 elections.”

Jonathan said he was in Port Harcourt to preciate the support Wike gave him during the burial of his brother- in-law.

“He assisted us and he came physically with his deputy and some principal officers of the state.”

Asked of his assessment of the two-and-ahalf years of Wike administration, Jonathan described him as one of the best governors.

“He is one of the best governors in terms of commitment and putting structures in ground. I have always say that for you to say you are doing well as a governor you must add value to whatever you met.”