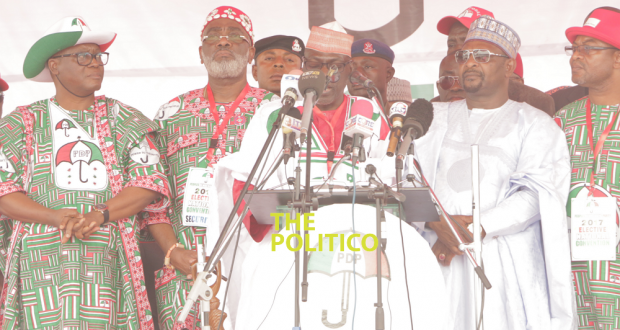 #PDPConvention2017: We must avoid a situation that will create problems – Makarfi

The National Caretaker Committee Chairman of the Peoples Democratic Party (PDP), Ahmed Markafi has called on the incoming leadership of the party to ensure that PDP’s doors remain wide open for both returnees and new members.

Makarfi made the call while welcoming delegates at the PDP National Convention on Saturday in Abuja.

The former Kaduna Governor who said this was imperative to ensure that they were not disadvantaged in any way, noted that  “just as it is also imperative that the loyalty, sacrifices, commitment and dedication of those who stuck with the party through thick and thin were not denigrated in any way.

“A level playing field must be availed all members so that we avoid a situation in which we create many other problems while trying to solve one.

“In words and actions, we must continuously assure and reassure members that loyalty to the party does, indeed pay and is rewarded.

“It is not out of place for me to advise the incoming leadership to focus, among others, on evolving ways that would facilitate greater involvement of women and youths in both politics and governance,” he said.

According to Makarfi, his Committee inherited and account that has not up to two million Naira in it.

He added that in spite of all the challenges encountered by his Committee, they were able to record some achievements.

Some of the challenges according to him, include litigation and inadequate finance as all but one of the bank accounts inherited by the Committee was garnished by various court judgments.

He said that inspite of all constraints, the Committee was able to lay a good foundation for the re positioning of the PDP, turning it into the beautiful bride coveted by all discerning politicians.

He added that the Committee was able to achieve substantial reconciliation among PDP members across the country, especially in states with serious leadership problems with several factions.

The states according to him were Adamawa, Anambra, Borno, Kebbi, Kwara, Lagos, Ogun, Osun and Oyo.

He expressed hope that before long, litigations would cease to be the vehicle through which members resolve their issues in the PDP.

Previous: Daniel, three others withdraw from PDP Chairmanship race
Next: PDP never deceived Nigerians in the 16 years it led the country – Jonathan