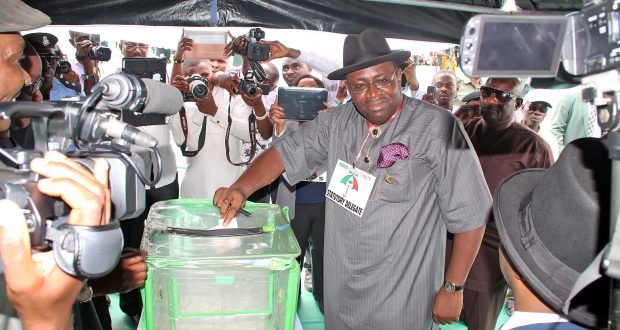 Bayelsa Governor, Seriake Dickson, has advised leaders of the Peoples Democratic Party (PDP) not to see the party’s National Convention on Saturday as an end but a means to regain power in 2019.

Dickson gave the advice when he received one of the National Chairmanship aspirants of the party, Raymond Dokpesi, at Government House, Yenagoa.

According to him, the major concern of PDP leaders now should be to have a successful Convention that would lead the party to victory in 2019.

“Let me caution our party leaders, I hope that we are not focusing too much on this Convention instead of focusing on winning federal power.

“I think we should be focused and be strategic and also think of how to get an acceptable candidate through a fair process open to the three North zones in the South.

“This is to enable us to get somebody who we will support and move forward. That is the key thing.

“I advise that people should not treat the next Convention as an end to itself but as a means to an end.

“Nevertheless, the Convention is important; we need to get it right. The process must be right and the outcome should also be acceptable so that we can move to the next stage,” he said.

Dickson, however, warned against any form of imposition or manipulation at the Convention, saying that the election was important to the future of the PDP and the country.

He said that the position of the governors had been that the delegates should decide who should lead PDP.

“There should be a paradigm shift in terms of the ways we conduct and perform party duties because we are now the opposition.

“In opposition, we must build bridges, do things rightly, respect and consult one another when there is a contest like this. We must compete fairly.

“I have always been inspired that the next Convention should be conducted in a transparent manner so that the outcome will be acceptable to all party men and women,’’ he added.

The governor commended Dokpesi for several years of dedicated and meritorious service to PDP, Ijaw Nation and Nigeria as well as his leading role on issue-based campaigns.

Dokpesi had told the governor that he was in Bayelsa as he did in other states, to appeal to delegates to the convention to vote for him for the progress of PDP and nation.

Previous: PDP is set to turn around the fortunes of Nigeria’s democratic process – Tsauri
Next: From today, i want to let you know that i am returning home to the PDP, says Atiku