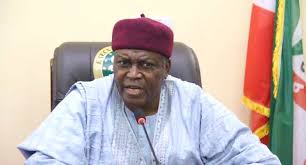 Governor Darius Dickson Ishaku of Taraba State has called on the people of the State to reject politicians that indulge in using religion to cause tension and conflict in the State.

Governor Ishaku made this statement on Tuesday through a press statement made available to media men in Jalingo, by his Special Adviser on Media and Publicity, Bala Dan Abu

The Governor also accused the leadership of the Muslims Rights Concern (MURIC) of “working for selfish and unpatriotic politicians.”

Ishaku was reacting to the various allegations levelled against his administration by MURIC.

He believed that the organization was being used by some overzealous politicians whom he said “would rather wish the State is set ablaze than for them to fail to win political power come 2023.”

MURIC, led by Professor Ishaq Akintola, had accused the government of Taraba of sidelining Muslims in the State, especially in the areas of appointments, promotion and employment.

Ishaku, according to the statement “has always ensured that favours done to any religious group is replicated in the same quantum to the other.”

Viewing MURIC’s action as “both ridiculous and mischievous”, such move, he said are “unexpected of a person who claims to be a follower of Allah”, adding that “Prof Akintola’s diatribe has, expectedly, generated intense distaste among the people of the State because it is obvious that he is fronting for selfish politicians who are bent on taking over power at all costs in 2023 riding on the wings of unhealthy religious sentiments.”

He said, “There is no doubt that some selfish politicians desperate to gain political power in 2023 have found a willing tool in Professor Ishaq Akintola and his Muslims Rights Concern, MURIC, over which he presides as director. The game plan is to use the pedestal, which MURIC offers, to cause religious disharmony in Taraba State for the politicians to gain political advantage.”

Passionately beckoning at the organization to cease from dividing the people along religious line, the Governor, the statement said, “has never and will never do anything that will undermine his legacy of peace that has won global acclaim.”