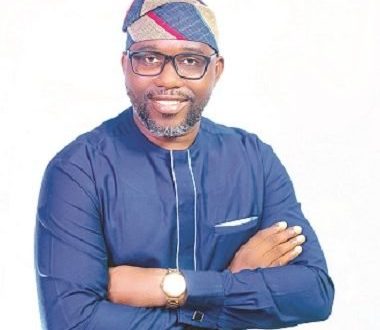 Politics not dirty, depends on how one plays it- APC stalwart

An All Progressives Congress (APC) stalwart in Abeokuta, Lanre Oyegbola-Sodipo, has said partisan politics should be public service.

Oyegbola-Sodipo, a Marketing Communications consultant and media practitioner, made the remark in an interview with our reporter.

He said he does not see politics as dirty. Rather, to him, something good can come out of politics, “depending to what use one puts it”.

He said: “With the right values such as honesty, commitment to public good and discipline, it will be easy to excel in any field, even in politics. This is because over time, one would have demonstrated these traits and would be known to your family, friends and contemporaries. This makes it easier for those you encounter even in a new terrain to trust and accept you.

“I dare say that there is room for improvement at our local government level. I recall that the Minister of Works and Housing, Mr Babatunde Raji Fashola, while delivering his Independence Day speech at the Platforms, said oftentimes, we call the President’s attention to issues that do not have direct impact on the common man. These issues are those that ought to be addressed at the local level.”

He suggested more focus on local government chairmen, because they are the closest to the people and that their activity or inactivity has a great effect on the community. His words: “Therefore, for us to have the sort of livelihood we desire, we need to demand for a better quality of local government administrators. Having accomplished so much in my professional life, by the grace of God, I believe there is a lot that I can contribute to the society, for the betterment of our people, especially at local government level.

Oyegbola-Sodipo, a candidate in the upcoming poll said: “My desire is to come in and do well. I am motivated by the desire to serve the people and ensure that communal development is driven from the grassroots.”

On the resort to godfatherism to secure a ticket, he said: “An average person has a godfather. This is because a godfather is an influential figure, who has a measure of confidence in you; enough to stand as a surety or referee. For example, multinationals often require prospective contractors/vendors to provide recommendations from previous clients. This serves as a form of surety.

“The same applies in the political space. This is because the group of people (party leaders and members) that want to give you a platform to serve needs to be sure that their candidate has character, competence and the right skill set. t means we all need and have a godfather. The person that stands by you or gives a nod of confidence to your person can as well be your godfather.”

“From my regular visits to the local government area, I observed that the health centres need a lot of improvement with better equipment for testing and medication for treatment such that the people don’t have to travel to the state facilities in Ijaiye or Federal Medical Centre for the most rudimentary medical attention like malaria and typhoid. Ideally, the latter ought to be referral centres for major health issues.

“At this time, it is important to give our health sector a lot more attention it deserves. We need to make major investments in the sector which will give the grassroots better livelihood; after all, health is wealth.

“In addition, we need to place a premium on education. When the late Obafemi Awolowo envisioned education for all in the old Western Region, it was not just about looking for money alone. It stemmed from genuine passion and sincerity of purpose.”

“It is also noteworthy that there is paucity of funds in the LGs. For all intents and purposes, this needs to be addressed and fast. Once this is done, it will provide adequate funding for new and existing projects.

“Let’s look back at the days we were growing up. How did we go to school? It was because there was sincerity on the part of our parents. Our parents wanted us to go to school and they did everything to make sure we did.

“In the beginning of this year, no one saw COVID-19 coming but it did. As concerned citizens, one of our priorities thereafter, was to produce 50 million facemasks for vulnerable Nigerians while empowering tailors across the different states of the federation.

“How did we do that? We designed a project that solved a problem and created jobs at the same time. Knowing full well that we didn’t have all the money, we assembled volunteer tailors whose businesses had also been impacted by the pandemic, fixed a price which was lower than the market prices and they agreed to sew the face masks which they did from the comfort of their homes.

In the process, we empowered the tailors who had lost their source of income to the pandemic – no one was making aso ebi or office outfits.

We took the same model to Abeokuta North, got tailors from the 16 wards to sew 20,000 facemasks and upon completion, were distributed through the community leaders to the poor who could not afford the face masks in the first place. This process ensured that they were also protected from the scourge of the virus.

“All I did was to come up with a good cause and people supported me. At the end of the day, we did not just hand over money to people, we solved a problem by getting them employed.

“As a local government chairman and with the limited funds at my disposal, I will creatively solve problems while creating empowerment opportunities and prioritising the welfare of the vulnerable in the society.”

Oyegbola-Sodipo supports local government autonomy, saying it is a great idea but that to be effective those at the helm of affairs should deliver on the basic needs of humanity.

For effectiveness, the local government administration needs strategy and skill-set to perform and impact on the people. He asked: ‘Why would you commit the funds to a man who lacks basic financial management skills and mental capacity for the tasks? So, the fundamental question will be ‘How many citizens are ready to put their local government chairmen to task by asking them to articulate their programmes and agenda?’

“You can only imagine what happens when you commit huge funds to a man whose best effort is to give out N5,000 handout to a handful of people and declare in the dailies that he has carried out widespread empowerment

“Even though Mr. President has assented to a bill which gives autonomy to the LGs, the biggest problem is that many aspire for this position without a manifesto. This is what Nigerians are lamenting about the decades of rot without hope for a change.

“Over the years, I have demonstrated what I can do. For example, I have an academic support programme that will impact on the families of 5,000 students. This is just one out of the many plans to improve the standard of life currently obtainable in Abeokuta North.

“I have seen a lot of citizens who are genuinely angry saying that the Governor is not doing enough in bringing development to their own area. Truth be told, we can’t continue to castigate the man who is the governor for these prevalent lapses because he cannot function simultaneously as the governor, LG Chairman and the councillor at the same time. The essence of local government is to bring the development programme of the Governor and the government closer to the people. This is why the governor will need quality hands – men and women – to lead various local government areas. Then he will be sure that his agenda will be deepened at the grassroots. Considering my track record, capacity, capability and well-thought out manifesto, I believe I am the man for the job in Abeokuta North.

Aware that many are running for the same ticket, he said: “In the chairmanship race for the Abeokuta North Local Government, we have a PhD holder, Master’s holders and even an engineer. This is an excellent array of aspirants and simply means that the space is getting better as more and more quality hands are coming through. This also goes to show that it is level playing ground for all and at the end, the best candidate will emerge.

Should he fail to get the ticket, Oyegbola-Sodipo philosophies: “Such is life; you win some, you lose some. Politics for me is never a ‘do-or-die.,” The Nation reports.