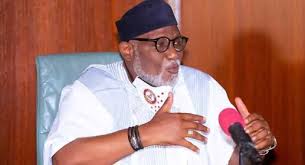 The Chairman of the Southern Governors’ Forum and Governor of Ondo State, Oluwarotimi Akeredolu, on Monday reacted to the position of the northern Governors on power rotation.

He said that t the Northern Governors’ Forum was merely exercising its rights to freedom of expression over its stance on 2023 presidency.

Akeredolu, emphasised that the resolution reached by the northern governors who unanimously condemned the statement by the Southern Governors Forum that the Presidency must go to the South should be termed as a means of expressing themselves.

Reacting to the resolutions of the Northern Governors’ Forum, Akeredolu said “They have expressed and indeed exercised their rights under Freedom of Expression. No one can stop them from expressing themselves.”

The Southern Governors’ Forum a few days ago in Enugu State reiterated their position that the presidency must return to south in 2023.

During the Enugu meeting, they also deliberated on the Value Added Tax, VAT controversy, where they agreed that it was the right of states to collect VAT.