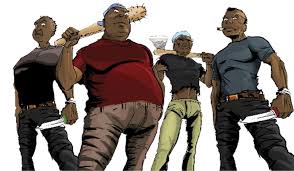 According to him, the thugs believed to be working for one of the aspirants in the election, invaded the premises, brandishing guns, machetes and other lethal weapons.

The chairman said it took the assiduous intervention of security operatives present at the venue, for him to exit the premises of Apa Gate Hotel successfully.

He added that the driver of the committee, Mr. Iorakaa was not so lucky as he was brutalized by the thugs.

Mkeenem said his car key was also snatched away from his drivers by the thugs.

A statement signed by the committee chairman reads: “I wish to inform the general public, especially Benue South APC stakeholders, that few moments ago, I was at the Apa Gate Hotel, venue of the distribution of electoral materials/collation of election results for the APC 2022 Benue South Senatorial Primary Election, and my committee had just distributed nomination forms to ward returning officers for six local governments; namely Ado, Apa, Otukpo, Okpokwu, Ogbadibo, and Oju; when all of a sudden, thugs believed to be loyal to one of the aspirants in the election invaded the premises; brandishing guns, machetes and other lethal weapons.

“It took the assiduous intervention of security operatives present at the venue, for me to exit the premises of Apa Gate Hotel successfully. Unfortunately, the driver of the committee, Mr. Iorakaa Philip, wasn’t so lucky, as he was ambushed by the hoodlums and battered to pulp, his two phones were also snatched and his vehicle vandalized. At the time of this press release, he is in excruciating pains, with bandages all over his body.

“In addition, the thugs successfully snatched the key of my car from my driver. As I issue this press statement, I am reliably informed that the thugs are snooping all over Otukpo town, searching for me. Hence, I had to find a safe haven to hide for a while.”