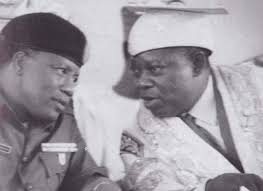 Eminent pro-democracy crusaders and rights activists have chided former military president, Ibrahim Babangida following his latest claims that he annulled the June 12, 1993 presidential election because there would have been a coup in the country.

The election was won by Chief Moshood Abiola,the candidate of the Social Democratic Party (SDP) who later died in detention after he declared himself president, The Nation reports.

Bbangida who spoke on Arise Television said there would have been a violent change of government if the election had ‘materialsed’.

He will be 80 years old later this month.

He said:“If it materialised, there would’ve been a coup d’etat — which could have been violent. That’s all I can confirm.

He alleged massive pressure from within and outside the military to cause trouble on account of the outcome of the election.

“The military can do it because they have the weapons to do it, and others (civil society groups) can use agitation,” he said.

Reacting to the Babangida claims,Afenifere and NADECO chieftains said the former military ruler was turning history on its head.

He lamented that that posturing was typical of ambitious military rulers from the North who loathed democratic transition and succession.

Adebanjo said the annulment contributed to disunity and suspicion that an ethnic group was bent on dominating other groups.

He maintained that the military drivers of the transition programme have gone into history as enemies of the people.

Adebanjo said:”Babangida never wanted to go. He was changing the goal post during the game.

“They only want unity according to their terms. They want to dictate the conditions for unity. We should sit down and agree. Otherwise, the deceit will continue.”

An Afenifere chieftain, Senator Olabiyi Durojaye, lamented that the historic poll results were cancelled after Nigeria held a free and fair exercise.

He said the annulment was annoying because Nigerians were full of expectation about a new dawn in the post-military era.

Durojaye, who was detained by the military over the pro-democracy struggle, said if Babangida had any information about an imminent coup, there was no evidence that he shared it with his colleagues in the Armed Forces Ruling Council (AFRC) and other critical stakeholders.

Noting that many have not overcome the shock of the annulment, he said:”History will take care of all the actors.”

NADECO chieftain and Third Republic House of Representatives Chief Whip, Olawale Oshun, accused Babangida of engaging in what he described as deliberate falsehood.

He said no one would buy unfounded rationalization and deceit

Oshun, who is the leader of Afenifere Renewal Group(ARG), said Babangida has God to contend with because his action led to the death of many young people along Ikorodu Road, Lagos when Abacha’s men opened fire during protest.

He said IBB’s account contradicted those of his colleagues in the AFRC, who were also taken aback by the annulment of the popular will.

Oshun said Babangida never wanted to vacate office, adding that in that plot to perpetuate the military, Gen. Sani Abacha was smarter.

He also lamented that the former military President polarized the polity in a bid to remain in power.

Oshun said:”He did not want to go. I was in the House of Representatives at that time. I knew the efforts he made to compromise the House to remain in office. The House was polarized.

“Of course, there were some ambitious men around him: people like Mark, who were not pleased with an Abiola presidency. But, officers like Col. Umar stood their ground on the election.”

While arguing that IBB lied during the television interview, he added:”He should tell that to the marines. Nigerians voted. He should have allowed it to stand.

“ Abiola won in the barracks. He said soldiers wanted to stage a coup. Are the soldiers more than millions of Nigerians who voted? IBB ruined our country. “

Why we took decision to annul MKO’s victory

Babangida, in the interview in which he also spoke on various national issues,branded his justification for the annulment of the June 12,1993 presidential election as his “honest reason” for the action.

His words: “If it materialised, there would’ve been a coup d’etat — which could have been violent. That’s all I can confirm.

“The military can do it because they have the weapons to do it, and others (civil society groups) can use agitation.”

He laid claims to “deft political moves” during his reign.

He said:“The definition of Maradona I got from the media is because of deft political moves. That’s the way the media described it.

“That’s the very good thing about the Nigerian media and Nigerian people, you have to anticipate them. If you anticipate them, then you live well with them. They call me ‘evil genius’, I marvel at that. The contradiction — you can’t be evil and then a genius.”

He cited the case of a military governor he claimed to have fired for alleged corruption involving about N300, 000 at that time.

He contrasted that with what he said now obtains when governors who stole billions of naira are walking free.

He said Nigeria’s military rulers are saints compared to civilians in terms of their handling of the nation’s wealth.

“You cannot compare what we did with what is on the ground now in terms of corruption. Corruption is more now. We are saints when compared to what is happening in the democratic era,” he said.

“When I was in leadership, I sacked a governor for misappropriating less than N313,000 but today, billions are being stolen and misappropriated, a lot of them are in court but still parade themselves in the streets. So tell me, who else is better at fighting corruption?”

My type of Nigeria’s next ruler

Babangida,an avowed supporter of the Peoples Democratic Party (PDP) said he has identified three persons who meet his criteria for Nigeria’s next President.

He said: “I have started visualising a good Nigerian leader. He should be a person who travels this country and has friends in every state of the country; a person who is very vast in the economy, a person who is a good politician who is ready to talk to Nigerians.

“I have seen about three already. The person should be in his 60s and I believe if we get such person, Nigeria will get it right.”

Read Also: Why June 12 election was annulled, by IBB

He said zoning is not particularly good for the country.

“We will have to make a choice either we want to practice democracy the way it should be practised or according to our whims and caprices,” he said.

“The way it should be done is to allow the process to be followed and allow anyone interested to throw his cap in regardless of where he comes from. Whether now or in the future, we will have to jettison the zoning system or power shift.”

“I am happy that we relate well.”

He accused the media of causing “the seeming rift between us.”

He expressed opposition to current agitation to balkanize the country by separatists.

He called for talks on how to strengthen the unity of the country.

He blamed the current agitations on “the tyranny of the elites.”

He added: “The politicians and elites are to be blamed.

“It is always good to agitate but because there is this belief that this country should be one. When they make the noise, they find that it won’t get supported, because Nigerians generally don’t believe in anything that would disturb their peace of mind. They won’t do it.”

”If you look back, if you take a place like Baga, in the north-east, the Igbo man, Yoruba man travelled up to Baga for trading, he lived very comfortably, he lived very well with the people around there.

“If you go to Lagos, the same thing, Yorubas, Igbos, who hold political appointments at local levels live very well with the people.

“I think we, the coming elites, did not succeed in imbibing that culture (culture of unity) for the country, so we rather live with the culture that the Europeans handed over to us — Northern Nigeria, Eastern Nigeria, Western Nigeria.

“There is a disconnect between leadership and followership. We don’t have core values anymore in the country which can be defended at any time. The way out is that leaders should understand Nigeria and Nigerians; use their intellect for the benefit of the people.

“There is too much control in the way the economy is now, there is a need to open it further, tap into the God-given talent of the people of the