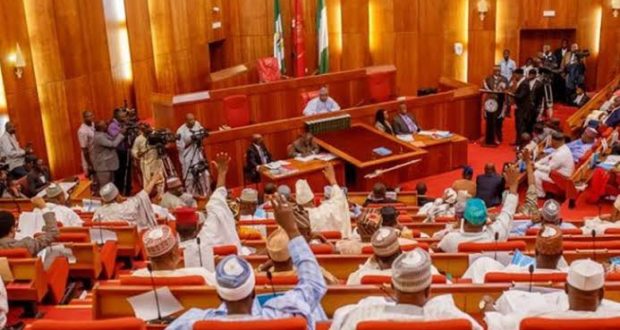 A bill seeking to raise value added tax (VAT) to 7.5% from 5% has passed second reading at the senate.

Some drama however play out during the proceeding as Senators complained that they are yet to see the copies of the bill.

TheCable reports that the federal executive council (FEC) approved an increase in VAT in September.

After Abdullahi moved a motion for the commencement of debate on the bill and read his lead paper, some senators complained that they did not know what the proposed legislation entails because they did not have copies of it.

Binos Yaroe, senator representing Adamawa south, raising a point of order, drew the attention of Senate President Ahmad Lawan to the fact that they did not have copies of the bill.

Yaroe said according to senate rules, every senator is meant to have copies of it.

“Our rules say that printed copies of the bill shall as soon as possible be sent to every senator,” he said.

Lawan noted his point but said the debate on it will still go on.

“We are at this point going to debate the general principles of the bill and in line with our tradition, convention here, even the appropriations bill that we debate, we don’t have the bill normally,” he said.

Betty Apiafi, senator representing Rivers west, also raised the same concern, but the senate president said: “When the senate committee on finance reports this, the bill will be made available and we can compare with what we are amending.”

He then ruled her out of order.

“The bill has five strategic objectives, the first one is to promote fiscal equity by mitigating instances of regressive taxation. The second one is to reform domestic tax laws to align with global best practices,” Yahaya said.

“The third is to introduce tax incentives for investment in infrastructure. The fourth objective is to support ongoing ease of doing business reforms and the fifth objective is to raise revenues for government including proposal to increase the value added tax (VAT) from 5% to 7.5%.”