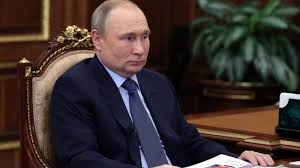 Putin gave the warning during a military parade marking the anniversary of the Soviet victory over Nazi Germany in World War II.

“Besides commemorating those who had defeated Nazism, it was important to stay vigilant and to do everything possible to ensure that the horrors of global war are not repeated,” he said.

Putin said fighting for Russia’s security was taking place today in the Donbass in eastern Ukraine.

He justified Russia’s invasion of Ukraine with NATO activities in the country.

He said Russia has pre-emptively repelled the aggression that was the only right decision.

He added that Moscow had repeatedly tried to reach an agreement for an international security solution.

The president said NATO had ignored Russia’s arguments and started to open up Ukrainian territory militarily.

But, concern Ukrainian officials urged citizens to heed air raid sirens and stay in bomb shelters amid fears that Russian attacks would intensify.

The fear rose as Moscow marked the anniversary yesterday.

Putin told troops they were fighting for Russia’s security now.

Russia’s intervention in Ukraine was needed because the West was “preparing for the invasion of our land, including Crimea”, Putin said, referring to the Black Sea peninsula Russia annexed from Ukraine in 2014 and giving no evidence for his assertion.

Previous: Jonathan meets APC Chairman, Adamu over controversial APC forms
Next: 2023: I am not like other aspirants who gave fake promises- Tinubu